Ruhlman started alongside Chris Keller on the outside of the front row and jumped out to the lead at the drop of the green flag. Ruhlman along with the rest of the front-runners survived a close call just past the halfway point in the race when a couple cars running at the tail of the field wrecked just in front of them. Devin Shiels was running fourth at the time and gave up his position to head to the pits. Last week’s feature winner Dusty Moore and Casey Noonan tangled a few laps later in turn four to bring out another caution period.

On the ensuing restart, the field stacked up as they were coming off turn four to take the green. Rusty Schlenk was running third and was collected in the melee forcing him to restart at the tail of the field with just nine laps to go. With Ruhlman continuing to lead, Wayne, Ohio’s Jeff Babcock marched his way through the field up to second. Babcock put some pressure on Ruhlman near the finish of the race, but Ruhlman held on to win after leading the entire distance. Babcock settled for second with Keller ending up third. Schlenk recovered nicely to finish fourth as did Dusty Moore who ended up fifth.

Mike Jessen earned his second consecutive UMP Sportsman feature win once again fending off the defending track champion. Jessen started on the outside of row one and took command at the start over Eric Bradner. Tim Line worked up into second by the halfway point of the race and pressured Jessen all the way to the checkered flag. Line worked the outside while Jessen stayed tucked down low The two drivers raced side-by-side lap after lap. Line had the advantage on lap 12, but Jessen fought back and reclaimed the lead and eventually took the checkered flag. Line was a close second followed by Jamie Grochowski who ended a great run in third after starting way back in 18th. Bob Krumm and Bruce Stuart were the rest of the top five finishers.

Pole-sitter Satch Crispen ran over Chris Sands in turns three and four while battling out front on the first lap of the Bomber A Main. This resulted in a complete restart with both drivers at the rear. Another driver emerging as an early contender for the points this year is Gregg Detray who got the lead early and maintained it through multiple caution periods to earn his second feature win of the year. Last week’s feature winner, Jeff Foks, peaked in the fourth position before retiring to the pits early in the race. Mathew Chapman finished second followed by Terry Rushlow, Garry Domoe and recovering to finish fifth was Chris Sands.

Racing action heated up in an action-packed Sport Compact feature with multiple drivers challenging for the lead the entire race. John Martis found himself out front at the start with about five other cars in close pursuit. Cody Stetten was the first to put pressure on Martis, but couldn’t take the lead away. Brandon Myers joined the fray and made it three-wide for the lead and again, Martis managed to remain the leader. Finally, Cory Gumm came up to challenge and took the lead as the white flag flew and went on to pick up the victory. Myers got by Martis to finish second with Martis slipping back to third. Stetten was fourth and Terry Rushlow Sr. took fifth.

Perhaps the most exciting racing action was saved for the final race of the night, the Bomber B Main. Terry Rump and Terry Perry had a great battle for the lead much of the race. After Perry closed in on Rump, he was able to take the top spot with just two laps to go. Coming out of nowhere to spoil things for Perry and Rump was Tim Murphy. Murphy made a bid for the lead on the backstretch of the final lap going three-wide with Perry and Rump and emerged with the lead coming to the checkered flag. Rump ended up second with Perry third. Richard Riffe and Charles Stuckey were the rest of the top five finishers.

Next week is another full racing program of UMP Late Models, UMP Sportsmen, Bombers and Sport Compacts on Saturday night at Oakshade Raceway with gates opening at 4pm and racing at 7pm. Then on Sunday, May 18, another 200 lap or two hour Enduro race will take to the track at 2pm. Gates for the Enduro will open at 12 noon. 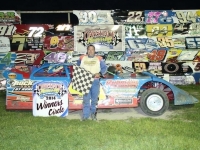 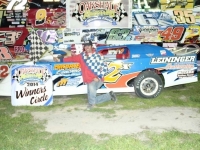 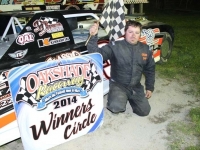 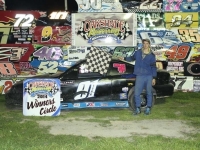 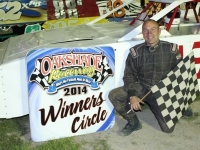