It was a few weeks later than anticipated, but Oakshade Raceway finally kicked off the 2019 racing season on Saturday night despite some soggy areas on the grounds that had yet to have a chance to dry out from all the rain over that past few weeks. That didn’t seem to bother the fans nor the racers for what turned out to be an exciting night of racing highlighted by the defending DIRTcar UMP Late Model National Champion Rusty Schenk’s win.

A couple early cautions slowed things down in the 25-lap UMP Late Model feature. The first yellow wiped out the lead Brad Wade initially jumped out to and resulted in a complete restart. After the complete restart, pole-sitter Ken Hahn would lead the field, but Jeff Robertson would slam the wall just after one lap was completed to bring out the final caution of the race. Hahn would continue to lead, but had Wade and Ryan Missler hot on his tail. Wade was able to claim the top spot on lap eight while Missler, Hahn and McClure, Ohio’s Rusty Schlenk battled three-wide for second. Schlenk would come out on top of that battle and tracked down Wade to take the lead on lap 17. Missler was able to get by Wade for second, but could not catch Schlenk. Devin Shiels finished fourth behind Wade with Mathew Chapman making his return to late model racing with a fifth place finish.

Swanton, Ohio’s Brandon Gregory had the field covered in the first UMP Sportsman feature of the season. Gregory started fourth and worked his way up to the front and picked up the victory over Joel Morton who started fifth. Josh Robertson, Bob Gregory and Mike Jessen were the rest of the top five finishers.

Cory Gumm out of Hillsdale, Michigan, started on the outside of the front row of the Napa of Swanton Compact feature event and captured the victory over Brogan Rehklau, Joe Elliot, Kevin Murday and Mark Barrick.

Only five of the 12 cars scheduled for the Hot Rod Welding & Engineering Bomber B Main were able to take the green flag and that number dropped right after the start when Ric Carper and Derek Zuver got together and Zuver barrel rolled to bring out the red flag. Both drivers were done for the night. John Martis rolled to a stop a few laps later and retired to the pits leaving only two cars to finish what was perhaps the most exciting race of the entire night. Dylan Burt and Zach Stotz battled hard lap after lap with Stotz working the hide side on Burt. The two drivers raced side by side for multiple laps and came to the checkered flag in just about a dead heat. Burt, from Toledo, Ohio, was declared the winner by only inches over Stotz. 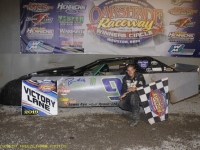 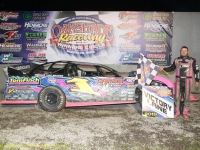 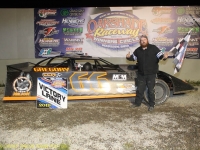 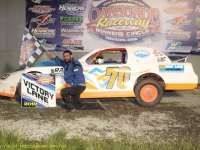 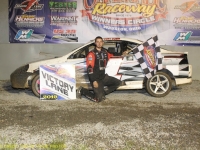