It was a wild night of racing at Oakshade Raceway on Saturday night as the Sportsman class was in the spotlight with the Sportsman Twin 25 feature events which were won by Rusty Smith and George Lindsey.

Last week’s Sportsman feature winner, Joe Derbeck, led at the start of the first 25-lap feature event until Bruce Stuart took command on lap three. Sylvania, Ohio’s Rusty Smith took the lead on the following lap and drove out to a huge lead. The rest of the field began to make up ground on Smith once he started working through lapped traffic. One of those cars about to get lapped spun just in front of Smith on lap 19 which brought out the only caution in the race and tightened the field for a restart. With clear track in front of him, Smith was able to pick up the easy win.

Rusty Smith drew an eight for the inversion of the starting line up in the second Sportsman 25-lap feature putting him on the outside of the fourth row. A broken shock would keep Smith from being a factor in the second feature. Rich Ruff started on the outside of the front row and raced with pole-sitter Roger Weirich for the lead early. The two drivers traded the lead a couple times until Ruff settled in and pulled away. George Lindsey from Adrian, Michigan, got by Weirich and then quickly closed in on Ruff late in the race. Lindsey passed Ruff for the lead on lap 22 and went on to take the checkered flag with last year’s winner, Mike Jessen, getting by Ruff to finish second.

UMP Late Model rookie driver Mathew Chapman was one of the winners of the Sportsman Twin 25s last year before moving up a class this season. Chapman started on the pole of the Late Model feature and led the first part of the race which had quite a bit of carnage. Track point championship contender Casey Noonan came to a stop on lap 4 to bring out the caution flag. McClure, Ohio’s Rusty Schlenk rushed to swap out engines Saturday afternoon before making it to Oakshade Raceway and the effort paid off. Schlenk took the lead from Chapman on lap eight, but Chapman wasn’t about to give up. Chapman closed back in on Schlenk while working though slower traffic, but Schlenk held on to pick up his first win of the season at Oakshade.

The Bomber A Main featured the top two in points battling for the lead on the final lap. Jeff Foks Jr. took the lead at the start with Craig Dippman nipping at his heels. Gregg DeTray joined the battle for the lead after taking second from Dippman on lap 11 of the 15 lap event. Two laps later, DeTray overtook Foks for the lead and the two drivers duked it out the final few laps. Foks attempted one last move to the inside of DeTray going into turn three on the final lap. Foks ran out of room and the two drivers made contact sending both spinning to bring out the yellow flag. Dippman inherited the lead for a one lap shootout to the finish and went on to pick up his first feature win of the year.

Toledo, Ohio’s Richard Riffe continued his dominance in the Sport Compact class, leading from flag to flag in the A Main to pick up his fifth feature win of the season. Jeff Foks Sr. made it a race though, riding right on Riffe’s rear bumper for most of the race, but couldn’t make the pass for the lead and settled for a second place finish.

Things were a little crazy in the Bomber B Main with a lot of crashes that brought out multiple caution flags and cut the race short when the time limit expired setting up a green-white-checkered finish. Rayce Price from Morenci, Michigan, started on the pole and led the entire way and was able to fend off Rick Dixon and Dylan Hough to pick up the feature win.

The only red flag of the night came in the final race, the Sport Compact B Main. Jeff Goodman got into Brandon Paskan going into turn one sending both cars sideways. Goodman’s car then began to barrell roll which stopped the race for a few moments as track crews worked to right his car. Toledo, Ohio’s Paul Miller led the entire distance to win the feature race.

Saturday, July 2 is Memorial Night at Oakshade Raceway as well as the Night of Wheels rescheduled from the rain out a few weeks back. UMP Late Models, UMP Sportsman, Bombers and Sport Compacts will all be in action as well as a bunch of bike giveaways for the kids during intermission. Gates open at 4pm with racing at 7pm. 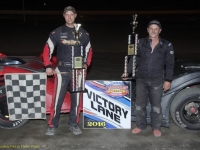 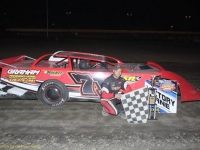 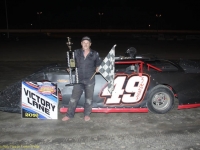 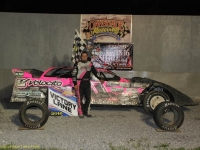 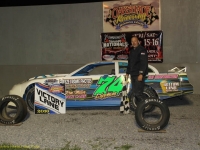 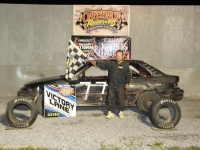 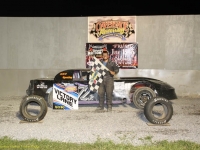 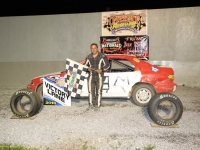