Early in the 25-lap Bomber Spectacular, Craig Dippman pulled out to a big lead. It was the first time Dippman has been in competition this year after an off-season injury had him sidelined until Saturday. Cundick worked his way up to second with Adam Noonan close behind and then the two drivers started to slowly chip away at Dippman’s lead. Finally Cundick was able to catch Dippman and the Wauseon, Ohio, driver took over the race lead with seven laps remaining. Adam Noonan followed into second and was right on Cundick’s back bumper late in the race until getting slowed up behind a lapped car just before the finish which cost him any shot at challenging for the lead. Noonan did hang on to finish second followed by unofficial 2019 track champ, Terry Rushlow. Dippman slid back to a respectable fourth place finish with Jeff Foks Jr. ending up fifth in the caution-free race.

A wild UMP Late Model feature event followed which saw multiple lead changes and a huge wreck. Weston, Ohio’s Matt Shipley was caught up in that wreck, but survived for his first ever late model feature win. A good field of 35 late models were whittled down to a 20-car starting line up for the feature event with Shipley starting inside the fourth row. Brad Wade started on the pole and led the first two laps. Mike Bores took his turn out front, leading laps three and four. David Mielke then took over on lap five. A lap eight caution would tighten up the field and then the big one happened on the restart. Bores, restarting second behind Mielke, spun in turn two in front of just about the entire field. The majority of the competitors ended up in a huge pile up in turn two which resulted in the red flag since the track was all but blocked. Because more than half the field was in the incident, no individual driver was charged with the caution and those that were able to continue got their positions back. That allowed Shipley to restart in second since Bores had retired to the pits. Despite being part of the big wreck, Shipley was able to drive past Mielke for the lead on lap 10. Other than a close call with a lapped car late in the race, Shipley made the win look easy. Mielke finished second with Garrett Wiles moving from his 11th starting position to finish third. Mathew Chapman gained six positions to end up fourth and Nick Kurtz rounded out the top five finishers.

Last week’s UMP Sportsman feature winner and the unofficial 2019 track champion put on quite the show in this week’s feature event, swapping the lead back and forth several times. Brandon Gregory started on the pole, but Jackson, Michigan’s Jerry Signor got to his inside to lead by a nose at the completion of lap one. Gregory would fight back on the high side and take the top spot on lap five. A lap six caution would restack the field with Gregory leading and trying to fend off Signor after the restart. Signor worked his way back to the lead on lap 11 after Gregory had to check up for a lapper. Gregory regrouped and took the lead back away one lap later. Another caution with five laps to go would tighten the field back up. Signor would get by for good one lap after the restart. Gregory was running second until slipping up way high in turn four on the final lap which knocked him out of a top five finishing position. Second place went to Mike Jessen followed by Joel Morton, Josh Robertson and Jake Gamber who started 17th.

Cameron Tusing took the lead early in the Napa of Swanton Compacts feature event, trying for his fourth win in the last five weeks. Hillsdale, Michigan’s Cory Gumm had other plans. After surviving a bump that got him completely sideways, Gumm was able to take the lead from Tusing on lap six of the 10-lap main event. Gumm went on to earn his eighth feature win of the year. Tusing had to settle for second. Jeff Rehklau finished third followedy by Joe Elliott and Eric Carr.

The final racing event of the season at Oakshade Raceway takes place Saturday, September 28th featuring topless UMP Late Models. The late model competitors will have no roofs on their cars allowing fans to see right down into the cockpits. UMP Sportsman, Hot Rod Welding & Engineering Bombers and the Napa of Swanton Compacts will also be in action for the final night of racing. Gates open at 4pm with hot laps at 6pm and racing at 7pm. Adult general admission is just $14! 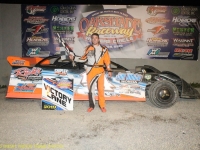 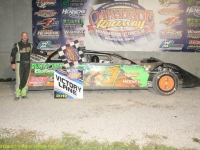 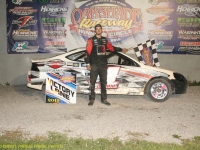 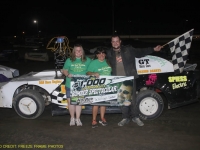