WAUSEON, OH – Several close track championship point battles weren’t decided until their class’s final race Saturday night at Oakshade Raceway. One of those was for the UMP Late Models in which Devin Shiels won the Season Championship Night feature and unofficially clinched his third consecutive track championship at the same time.

Dusty Moore started from the pole in the 25-lap UMP Late Model Season Championship feature and seemed to pick up where he left off two weeks ago after winning the American Late Model Series event. Moore opened up a decent lead early, but Britton, Michigan’s Devin Shiels had worked his way up to second after starting seventh and was closing in on Moore. Shiels caught Moore and the two drivers battled side by side for the lead. Shiels took the lead by the halfway point of the race, but Moore would battle back one lap later and regain the lead. Shiels finally took the lead for good the following lap and went on to pick up his third feature win of the year to secure the points championship over second place finisher Steve Kester. Moore slid back to a third place finish just ahead of Mathew Chapman and Dan Wallace.

Brandon Gregory of Swanton, Ohio, took advantage of a lap four restart after a caution to get by Jake Gamber for the lead in the Season Championship UMP Sportsman feature. Gregory was able to open up a huge lead, but a caution on the final lap would tighten up the field for a one-lap shootout to the finish with Gregory’s father, Bob Gregory, restarting just behind him in second. Brandon was able to hold off his father for his fourth feature win of the season. That was good enough for third in the final point standings. Another championship contender, Mike Jessen, finished third in the race, but it was not enough to catch Jerry Signor in the championship points. Signor ended up fourth, but unofficially earned the Oakshade UMP Sportsman track championship. Joel Morton finished the race in fifth.

Multiple incidents marred the start of the Season Championship Hot Rod Welding & Engineering Bomber A Main. One of which brought out a lengthy red flag after Roscoe Stetten’s throttle hung open going into turn three, sending him barrelling into the barrier off the corner. His car ended up nose up in the catch fence. Thankfully Stetten was not seriously injured. After at least four attempts to complete one lap, things finally got going with championship contender Jeff Foks Jr. darting out to the lead over point leader Terry Rushlow. Foks, out of Holland, Ohio, went on to his fifth A Main win of the season, but it wasn’t enough for the track championship which unofficially went to second place finisher Terry Rushlow. Rushlow’s margin of victory was four points over Foks in the final point standings. William “Bubba” Cundick got caught up in one of the first lap incidents and made repairs in the pits forcing him to start at the back of the field and still managed a third place finish. Adam Noonan had an outside shot at the point championship at the beginning of the night and ended up finishing fourth in the race which should lock him into third in the final point standings. Amy Clair stayed out of trouble and had a nice run finishing fifth after starting 13th.

Toledo, Ohio’s Cameron Tusing has been on a roll the past few weeks in the Napa of Swanton Compacts, winning his third feature in the last four weeks. Tusing led from flag to flag for that third feature win of the year. Cory Gumm elected to start dead last in the feature and drove to a second place finish. Gumm had already unofficially secured the track championship before the night’s competition began. Joe Elliott made a nice save after his car got completely sideways earlier in the race to finish third ahead of Eric Carr and Aaron Barrick.

Haley Dippman started on the pole of the Season Championship Hot Rod Welding & Engineering Bomber B Main and led the field into turn one. Dippman spun and fell back through the running order as the race remained green. An elated Ron Bloomfield Sr. would inherit the lead and go on to pick up the victory. Dippman recovered nicely, working her way back through the field to finish second ahead of Steve Reeves, Brian Miller and Dave McMannamy.

The Hot Rod Welding & Engineering Bombers will take center stage at Oakshade Raceway on Saturday, September 21 with the $1,000 to win Papa Boiler Bomber Spectacular. Joining the Bombers in racing action will be the UMP Late Models, UMP Sportsman and the Napa of Swanton Compacts. Gates open at 4pm with hot laps at 6pm and racing at 7pm. Adult general admission is just $14. 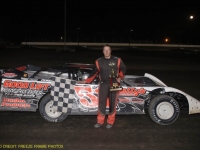 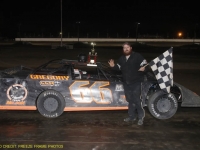 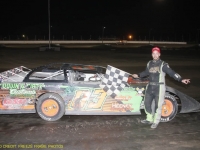 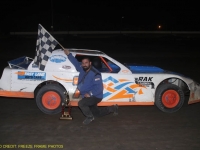 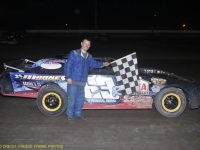 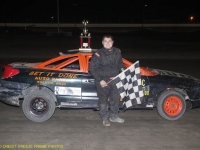 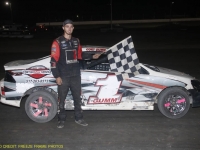 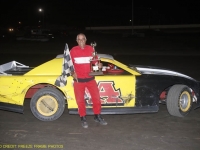