Noonan, out of Sylvania, Ohio, started the 25-lap DIRTcar UMP Late Model feature from the pole and darted out the lead at the drop of the green flag with Devin Shiels challenging from second early. Eventually Noonan would open his advantage over Shiels, but Shiels would slowly reel the race leader back in once they started working lapped traffic.

Shiels began to put some pressure on for the lead late in the race but several late race cautions would reset the field with clear track in front of the leaders. The last caution period would set up a one lap shootout to the finish. Noonan launched off turn four to open a bit of a gap over Shiels on each of the late race restarts, but Shiels managed to stick with Noonan on the final restart. Noonan was able to keep Shiels at bay and held on to pick up the victory. Shiels settled for second. Both drivers continue to sit atop the point standings and are only separated by 18 points heading into the final stretch of races of the season.

Steve Kester was able to pass Curtis Roberts on the final lap to finish in the third position and Rusty Smith finished fifth behind Roberts.

Karl Spoores jumped out to the early lead of the 20-lap Sportsman feature event with Joe Smith close behind. Smith would pass Spoores by the completion of lap two and set sail with the race lead.

Adrian, Michigan’s Carter Murday trailed Smith most of the race, running in the second position. Without the aid of any caution flags to tighten up the field, Murday found lapped traffic to be to his advantage. Murday closed up the gap and made a bid to the outside of Smith in some heavy lapped traffic and took the lead away with just two laps remaining.

The leaders continued to battle through lapped traffic and Murday tangled with a lapped car coming off turn four on the final lap with the checkered flag in sight. Murday spun across the finish line to earn his fourth win of the season and reclaimed the top spot in the track point standings. Smith settled for a close second place finish followed by Jesse Jones, Jake Gamber and Spoores.

William “Bubba” Cundick led the first lap of the Dominator Super Stock A Main, getting the jump on point leader Kolin Schilt. Cundick got into turn one a little high on the second lap allowing Schilt to take the lead away. Cundick tried to fight back to the inside, but the Stryker, Ohio, driver fended off the challenge and began to pull away.

A big wreck just in front of the race leader would bring out the first yellow flag of the race and wipe out the big lead Schilt had built up with just a few of laps remaining. One more caution would set up a two-lap race to the finish and in the end, Schilt proved to be the class of the field and won his fourth Dominator Super Stock A Main of the year. Dean Taylor got by Cundick to finish second with Adam Noonan and Scott Hammer rounding out the rest of the top five finishers.

Cory Gumm, out of Hillsdale, Michigan, started on the pole of the Compact A Main and drove to his first Oakshade Raceway feature win of the season. Aaron Vanpelt looked strong, picking up the win in his heat race earlier in the evening and moved up three positions to finish second ahead of point leader Ryan Okuley in the feature. Eric Carr, winner of the last three Compact A Mains, started on the outside of the front row and slipped back to finish fourth with Jason Deshler gaining four spots to wind up fifth.

Brian Miller grabbed the lead at the start of the Dominator Super Stock B Main and then slipped back to the third position with what appeared to be a very loose race car. Miller would end up spinning on lap nine to bring out the caution flag which ended his top five run.

Fayette, Ohio’s Donovan Paskan took the lead from Miller on the second lap and held off a late race challenge from Craig Turner to earn the win with Turner taking second. Derek Zuver held off Scott Barnhart for third and Gary Domoe was fifth.

Brandon Proffitt out of Adrian, Michigan, led the entire distance of the final race of the night, the Compact B Main. Logan Streight was running second until he lost control and spun on the front stretch on lap number four. Dalton Mcvey climbed 10 positions to finish second behind Proffitt with Lawrence Mullins in third. Streight rebounded to finish fourth and Todd Drewes Jr. ended up fifth.

Racing action continues to heat up in the month of August at Oakshade Raceway. This Saturday, August 13, Oakshade will host another full racing program of DIRTcar UMP Late Models, Sportsman, Dominator Super Stocks and Compacts. Plus, the Vintage American Race Cars (VARC) will make their only appearance of the season with race cars from yesteryear on display and racing. Gates open at 4pm with hot laps at 6pm and racing at 7:15pm. 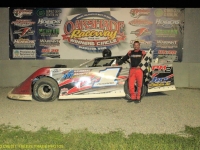 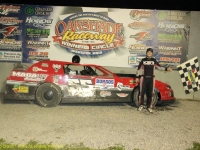 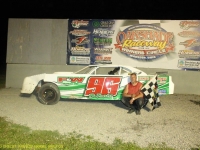 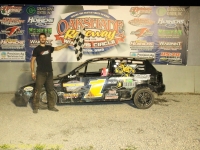 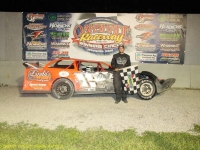 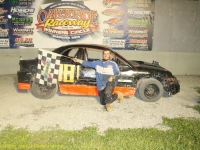