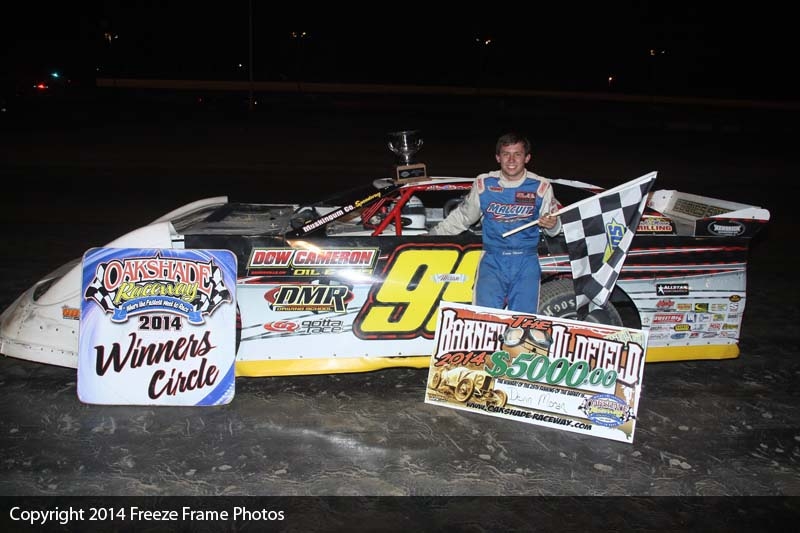 Oakshade Raceway hosted the 25th Annual Barney Oldfield Race on Saturday night which doubled as an American Late Model Series event that drew in 45 UMP Late Models to compete for the $5,000 to win. Race fans packed the grandstands and were treated to some very fast racing action that was highlighted by Devin Moran’s masterful feature performance.

Moran dove to the inside of Allen Vochaska and Ryan Missler to take the lead at the start of the 40-lap Barney Oldfield feature event. Vochaska slipped up high in turn two on lap seven and faded back into the field. Moran maintained a huge lead while patiently working through lapped traffic until Missler’s top five run ended on lap 28 when he came to a stop in turn three to bring out the caution flag.

Rusty Schlenk, winner of the last three Oakshade features and the previous night’s race at Farmer City, almost didn’t make it to the track due to mechanical problems with his hauler. Schlenk’s luck didn’t improve. He got crossed up in turn four on lap 33 while running in the top five which brought out the yellow flag and knocked him out of contention.

A couple more late cautions kept the field tight, with Matt Miller in second after starting on the outside of the fourth row. Unfortunately for Miller, Moran was able to pull away on each restart. Devin Moran picked up his first ever Oakshade Raceway win in only his second start at the 3/8 mile bullring. After the race, he thanked all the great race fans at Oakshade who had come out to support him.

Miller settled for a second place finish with Dona Marcoullier finishing strong in third after starting 12th. John Henry and Brian Ruhlman were the rest of the top five finishers. Doug Drown had run in the third position much of the race, but slipped back to end up sixth.

Mike Jessen moved under Bruce Stuart to lead the first lap of the UMP Sportsman feature race, but Stuart battled back and took the lead on lap two. Jessen finally took command for good on lap three with Tim Line eventually moving into second. Line tried to get alongside Jessen for the remainder of the race, but couldn’t get it done as Jessen took the checkered flag for the fourth time this season. Line’s second place finish was good enough for him to maintain the Sportsman points lead. Jamie Grochowski finished off another great run in third after starting 14th. Chester Fitch posted a fourth place finish with Bob Krumm fifth.

Terry Rushlow started on the pole of the Bomber A Main and had to contend with Chris Sands in the first part of the race. Rushlow fought off the challenge and then point leader Jeff Foks got by Sands for second. Soon after, Sands got into the rear of Foks turning him around in traffic. Foks suffered some damage and fell way back in the running order, but was able to continue without a yellow flag. After a caution for Brandon Leighton’s spin on lap four, Rushlow and Sands battled side by side for the lead. The two drivers traded the lead until Sands got by for good on lap seven. A couple laps later, Rushlow slipped up high in turn two and rolled to a stop on the backstretch. Sands went on to pick up his first Bomber A Main win with Jeff Foks rebounding to finish second and taking the points lead by a single point over Rushlow. Chris Henry was third followed by Tim Murphy and Curt Dickie who started 20th.

“Junior” Jerry Hoot led most of the Sport Compact feature and had opened a up a big lead. Unfortunately for him, he retired to the pits with just two laps to go. That turned the lead over to John Martis. Martis managed to hold off Terry Rushlow Sr. who had gotten along side Martis on the final lap. Martis just barely had enough and won in a side by side finish with Rushlow. Brandon Myers finished third with “Sparky Marky” Gillingham fourth followed by father Mark Gillingham Sr. in fifth.

Steven Pocock put a stop to the Bomber B Main after rolling over in turn two which brought out the red flag with one lap complete. Tim Hancock was the leader, but Teri-Lynn Murphy took the lead away on lap two and went on to pick up the victory with Chuck Stuckey finishing second. Hancock slipped back to finish third with Dan Shaffer and Terry Rump round out the rest of the top five finishers.

It is the “Night of Wheels” at Oakshade Raceway on Saturday, June 28. A large number of bicycles will be given away at intermission which will put smiles on a bunch of kids faces. A full racing program feature UMP Late Models, Sportsmen, Bombers and Sport Compacts will also entertain the entire family with exciting racing action. Gates open at 4pm with racing starting at 7pm. 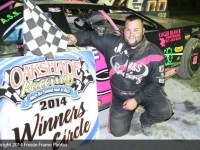 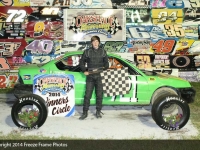 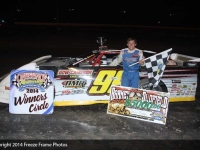 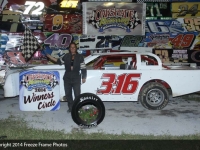 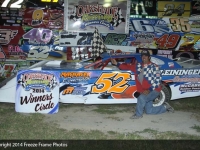