Jim Plotts started on the pole and looked strong leading the first half of the UMP Late Model feature event. Plotts fended off an early challenge from Colin Shipley. Dewitt, Michigan’s Chad Finley worked his way past Shipley and took the lead from Plotts on lap 14 of the 25-lap main event. Casey Noonan moved up to second late in the race after starting sixth but could not close in on Finley who took the checkered flag easily in the caution-free race. Noonan settled for a second-place finish with Rusty Schlenk taking third. Plotts faded back to fourth with last week’s feature winner, Devin Shiels, finishing fifth.

In just his second start in the UMP Sportsman class, Donovan Paskan drove out in front of the feature after starting on the pole. Unfortunately, that lead was short-lived as Ian Palmer powered by to lead by the completion of lap number one. Palmer led the first handful of laps with Defiance, Ohio’s Josh Robertson knocking on the door. Robertson was able to Palmer for the lead and never looked back. A late caution would tighten up the field and give second place runner Carter Murday a shot at the lead, but Robertson was too strong and picked up the victory. Murday settled for second with Mike Jessen third. Palmer slipped back to finish fourth with Paskan rounding out the top five finishers.

Gabe Mueller, from Holland, Ohio, started on the pole of the Bomber A Main and led the entire distance to pick up the win. Multiple cautions kept the field tight, including one for last week’s A Main winner, Adam Lantz which ended his night early. Jeff Foks Jr. started 12th and worked his way all the up to a second-place finish with Justin Gamber, Kolin Schilt and Donnie Ringman the rest of the top five finishers.

Last week’s Compact A Main feature winner, Eric Carr, took the early lead in this week’s feature event. Cory Gumm, out of Hillsdale, Michigan, had battled with Carr for the lead last week before falling off the pace. This week, however, Gumm was able to take the lead from Carr on lap five. Despite his motor running at over 300 degrees, Gumm held off Carr to pick up the checkered flag. Carr finished second followed by Ryan Okuley, Charles Hargett and Todd Drewes.

A spectacular crash brought the Bomber B Main to an immediate halt on the very first lap. Dylan Wittes got in front of the field and got turned sideways entering turn three and barrel rolled several times. Wittes was uninjured but was done for the night. Once racing resumed, Burt Sharp paced the field with Taylor Dippman following in second. A car length or two separated Sharp and Dippman for most of the race. On the final lap, Dippman drove hard under Sharp going into the final set of turns. Somehow Dippman’s car stuck and the Oregon, Ohio driver came off the final corner with the lead and was first to cross the finish line. Sharp came across second with Alex Stoudinger recovering after an earlier caution to finish third. John Lonabarger and Scott Forrest finished fourth and fifth, respectively.

Oakshade Raceway capped off the night with a Compact B Main that saw only half the grid make it out on to the track. Butler, Indiana’s Chariti Roby led the entire distance and picked up the easy win over Todd Drewes Jr. and Vanessa Goodman.

Action continues next Saturday, May 15, with more UMP Late Model, UMP Sportsman, Bomber and Compact racing at Oakshade Raceway. Gates open at 4pm with hot laps at 6pm and racing at 7pm. 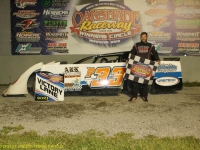 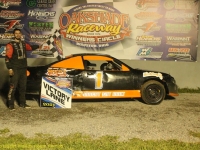 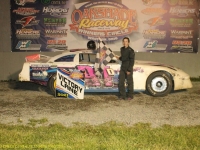 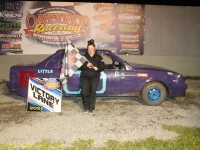 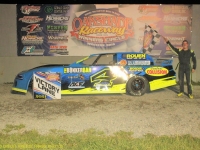 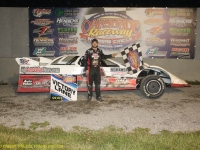