Current point leader and three-time track champion Devin Shiels launched the lead on the first lap of the UMP Late Model feature after starting on the outside of the second row. A big pile up involving Chad Doxsee, Bill Reeves Sr. and Scott Moyer brought out the red flag on lap four to give track crews a little more room to work to clear the nearly blocked track.

McClure, Ohio’s Rusty Schlenk had worked his way up to second by the time of the incident and put on a heck of a battle with Shiels after the restart. The two driver’s battled door to door with Schlenk getting the advantage on lap five. Shiels fought back and regained the lead by a nose the following lap. Finally, after more than a handful of side-by-side racing for the lead, Schlenk was able to clear Shiels on lap 11. Schlenk stretched his lead and went on to take the checkered flag. Shiels was able to close the gap just a bit a couple times while working through slower traffic but had to settle for a second-place finish with Casey Noonan finishing third. Pole-sitter Colin Shipley slipped back to end up fourth with Dusty Moore rounding out the top five.

Rusty Smith out of Sylvania, Ohio, started on the pole of the UMP Sportsman feature and after a couple early race cautions he began to pull away with the lead. Late in the race, Anthony Voyles and Steve Mills got together with Mills slamming hard into the front stretch wall bringing out the red flag with four laps remaining. After the restart, Smith once again pulled away from the field and went on to pick up his first feature win of the season. Carter Murday finished second followed by Mike Jessen and last week’s feature winner, Josh Robertson, who had to start in the back of the field. George Lindsey was fifth.

Things got messy at the start of the Bomber A Main with a multi-car incident on the first lap that brought out the yellow and necessitated a complete restart. Stryker, Ohio’s Kolin Schilt started on the pole and jumped out in front of the field and opened up a decent lead. A late caution wiped out Schilt’s advantage and set up a three-lap dash to the finish with last week’s A Main winner Gabe Mueller and Adam Lantz right behind. Schilt was able to hang on and pick up his first feature win of the season with Mueller and Lantz finishing second and third respectively. Jeff Foks Jr. gained six positions from the start to finish fourth with Donnie Ringman ending up fifth.

Last week’s Compact A Main feature winner, Cory Gumm, started on the pole but steering issues would cut his night short. After an early caution at the start of the race, things got interesting with a four-wide battle for the lead going into turn three. Joe Elliott, Jason Deshler, Charles Hargett and Eric Carr from Wauseon, Ohio, all fought for the top spot with just about each driver leading at least one lap. Carr would fall off the pace after dropping a cylinder. Somehow Carr would persevere and came back to pick up his second win of the season in a close one over Deshler. Hargett would come home third with Todd Drewes and Joe Elliott rounding out the rest of the top five finishers.

Aaron Barrick led the first couple laps of the Bomber B Main until Toledo, Ohio’s Dylan Burt took command on lap three. Craig Turner was running in the top five but contact with Cody Stetten would end up bringing out the yellow flag sending both drivers to the tail. Logan Hough had worked his way up to second despite some early race damage and ended up falling off the pace and retiring to the pits just past the halfway point of the race. More trouble for top five cars came on lap nine when Barrick spun while running in the third position. In the end, Burt was able to fend off Stetten who had worked his way back up to second after his earlier caution. It was Burt’s first feature win of the season. Following Stetten was Ryan Clair in third and Dave McMannamy in fourth. Jason Drummond finished fifth.

In Compact B Main action, Todd Drewes Jr. got by John Hart to lead the first lap and then proceeded to pull away with the lead. Mid race, Drewes slipped up high and then fell off the pace which allowed Chariti Roby from Butler, Indiana, to get by and pick up her second consecutive B Main victory. Matt Stratton finished second followed by Vanessa Goodman and John Hart. Drewes held on to finish fifth.

The Bomber C Main was the final race of the night with former asphalt racer Jeff Wells out of Toledo, Ohio, leading from flag to flag to pick up his first feature win. David Ellis finished second followed by Jeff Clark, Bradley Goad and Seth Baker.

Action continues next Saturday, May 22, with more UMP Late Model, UMP Sportsman, Bomber and Compact racing at Oakshade Raceway. Gates open at 4pm with hot laps at 6pm and racing at 7pm. 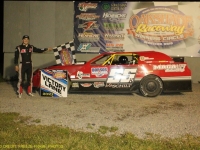 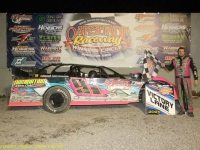 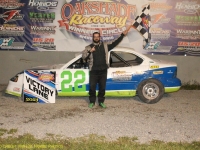 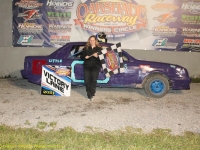 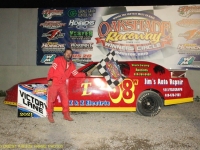 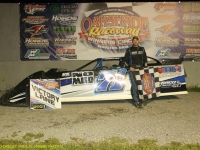 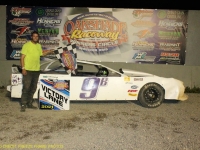