WAUSEON, OH – Oakshade Raceway hosted the 33rd Annual Barney Oldfield Race on Saturday night with four-time track champion Devin Shiels finally adding his name to the coveted list of winners and he took home the Barney Oldfield trophy along with $5,000 for his efforts.

Shiels, out of Britton, Michigan, started on the outside of the front row and got the advantage over pole-sitter Mike Bores at the drop of the green flag of the 40-lap Barney Oldfield Late Model feature event. Shiels opened up a over a straightaway advantage over Bores until lapped traffic allowed Bores to cut that deficit in half in the later stages of the race. Without the aid of any caution flags, Bores was unable to catch Shiels who led from flag to flag. After the race, Shiels said this was the biggest race win of his career. Rusty Smith posted a third-place finish behind Bores with Jeep Van Wormer and Ryan Missler rounding out the top five finishers.

Chris Williams took command of the 20-lap Sportsman feature event at the onset after starting on the pole and he led the entire distance to pick up the win. Williams, out of Grand Rapids, Ohio, had a car spin in front of him that brought out the caution flag with three laps remaining. Williams pulled away from second-place Jesse Jones on the restart on the way to pick up the checkered flag. Jones finished second followed by Matt Ringger, Joe Smith and Jeff Robertson.

In Dominator Super Stock A Main action, Craig Dippman took the early lead from his outside front row starting position. William “Bubba” Cundick from Wauseon, Ohio, looked to the inside of Dippman on a restart after an early caution and would take the lead away. Dippman would fade back through the running order with Kolin Schilt taking over second. Schilt dove to the inside of Cundick on the final lap to challenge for the lead and ended up spinning in turn two to bring out the second caution of the race which set up a one-lap shootout to the finish. Cundick would lead Scott Hammer back to the green flag and held on to pick up his first feature win of the season. Hammer settled for second with Chris Bleikamp close behind in third. Adam Noonan finished fourth and Donnie Ringman was fifth.

New Bavaria, Ohio’s Ryan Okuley led the entire way in the Compact A Main after starting on the outside of the second row. A big incident involving five cars slowed things down early in the race, but Okuley was able to hold off Aaron VanPelt who finished second. Jason Deshler, Gage Rushlow and Tyler Sandahl were the rest of the top five finishers.

Rookie driver Jayden Bleikamp from Wauseon, Ohio earned his very first feature win after leading the entire distance of the Dominator Super Stock B Main. A big crash on the front stretch involving Bobby Swagger, Jimmy Wahl and at least one over driver slowed things after completing the first lap. Bleikamp was able to drive away from the rest of the field on the restart and held on to take the checkered flag. Dan Dippman finished second and Garry Domoe came all the way from the very back of the field to finish third. Craig Turner finished foruth and Donovan Paskan also came from deep in the field and ended up finishing in the fifth position.

James Stamper jumped out the early lead in the final event of the night, the Compact B Main, but that lead would be short-lived. Jack Bailey passed Stamper for the lead on the second lap, but his lead would also be short-lived. Wauseon, Ohio’s Eric Carr would dart by Bailey after a restart for a caution and went on to pick up the victory after starting near the back of the field. Bailey settled for second with Stamper slipping back to finish third. Mike Rice and Taj Mitchell were the rest of the top five finishers.

Oakshade Raceway will host the Oakshade/Attica Late Model Challenge series as part of a full show of DIRTcar UMP Late Models, Sportsman, Dominator Super Stocks and Compacts on Saturday, June 25 in addition to the Night of Wheels. Kids will be eligible to win a brand-new bicycle at no extra charge. Gates open at 4pm with hot laps/qualifying at 6pm and racing at 7pm. 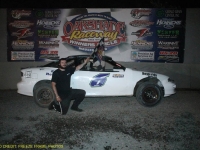 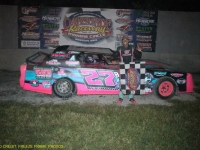 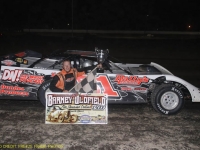 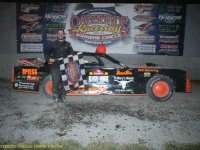 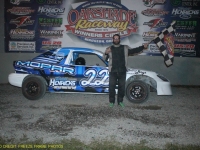 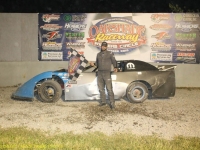