Colin Shipley, who is third in the track point standings, slowed on the track shortly after the drop of the green flag in the UMP Late Model feature and brought out the only caution flag of the race. Shipley would retire to the pits to finish 23rd. Once the field returned to racing, Weston, Ohio’s Rusty Schlenk and Adrian, Michigan’s Chris Keller put on a great battle for the lead. The two drivers battled side by side and exchanged the lead a few times. Finally, Schlenk in his Domination Race Car #91 was able to clear Keller and open some breathing room on his way to the checkered flag. Keller fended off point leader Devin Shiels to finish second. Dona Marcoullier had worked his way up to third at one point during the race but slipped back to finish fourth behind Shiels. Casey Noonan finished fifth.

Mike Jessen from Berkey, Ohio, closed the point gap between himself and point leader Josh Robertson just a bit after picking up the victory in the UMP Sportsman feature event. It was the first feature win of the year for the four-time track champion. Josh Robertson minimized the amount of points Jessen was able to gain with a second-place finish. Last week’s feature winner, Rusty Smith, finished third followed by George Lindsey and Ian Palmer.

Adam Lantz charged to the lead on the outside early in the Bomber A Main but would begin to fade halfway through the event. Jeff Foks Jr. from Holland, Ohio, would take over the race lead and go on to pick up his first feature win of the season. Point leader Gabe Mueller held off Brad Eitniear to finish second for the second consecutive week. Donnie Ringman and Justin Gamber were the rest of the top five finishers.

It was the battle of Carrs in the Compact feature event. Wauseon, Ohio’s Joe Carr started on the pole of the feature and went on to pick up his first feature win of the season over point leader Eric Carr.  Eric Carr got to the inside of Joe Car the final few laps, but Joe was able to hang on and pick up the victory in a close finish. Jason Deshler finished third with Ryan Okuley and Jeff Goodman rounding out the rest of the top five finishers.

Bobby Swagger opened a big lead early in the Bomber B Main which was the final race of the evening. Chane Stuckey, out of Toledo, Ohio, quickly ran down Swagger after starting 12th and took the lead by lap three. The red flag would fly on lap six after Ron Hulbert’s machine caught fire while racing. The fire was quickly extinguished, and Stuckey went on to pick up the easy B Main victory. Swagger finished second followed by Chris Bleikamp and last week’s B Main winner, Jeff Wells. Pole-sitter Ryan Clair slipped back to finish fifth.

The American Late Model Series returns to Oakshade Raceway for the first time since 2019 this weekend along with UMP Sportsman, Bombers and Compacts. Gates open at 4pm with hot laps at 6pm and racing at 7pm this Saturday. 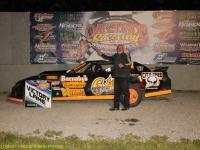 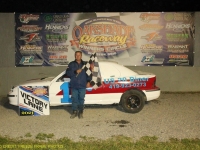 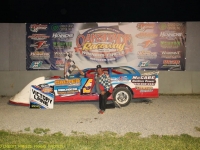 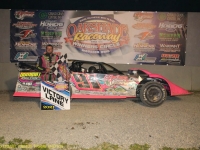 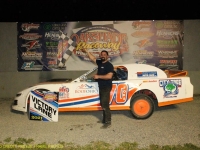