Current Oakshade Raceway UMP Late Model point leader, Devin Shiels earned the Attica Raceway Park track championship on Friday night and drew a pole starting position for Saturday night’s feature at Oakshade. Shiels darted out to the early lead over last week’s feature winner, Brian Ruhlman. Schlenk started eighth and quickly closed in on the front runners by staying on the high side through the corners. After Schlenk took over second position, lapped traffic became an issue. Shiels’ lead would shrink and grow depending on how the leaders came up on the slower traffic. Finally with just four laps to go, Schlenk found enough clear race track to take the lead and the eventual victory. Shiels settled for a second place finish behind the six-time track champion, and increased his point lead slightly over Ruhlman who ended up third. Steve Kester and Casey Noonan were the rest of the top five finishers.

B.J. Gregory dominated the UMP Sportsman feature race after battling with Mathew Chapman early in the race. Despite a caution on lap one that resulted in a complete restart, the race ran all 20 laps caution-free allowing Gregory to open up a commanding lead. It would be the second consecutive feature win for the Swanton, Ohio, driver. Current Oakshade Sportsman point leader Drew Smith rebounded for a second place finish after last week’s DNF. Chapman ended up third with Brian Fisher finishing fourth in his first start of the season. George Lindsey finished fifth.

Rich Riffe led the first couple of laps of the Bomber A Main, but Oregon, Ohio’s Craig Dippman took the lead by lap three and went on to pick up his first feature win of the year. Jeff Foks Jr. battled with Riffe for second much of the race, but was able to eventually get by Riffe. Foks mounted a late challenge on Dippman for the lead, but came up short having to settle for a second place finish. Riffe took third with Tim Hancock moving up nine positions to end up fourth. Chris Henry finished fifth. Foks’ second place finish slightly increased his Bomber point lead to 18 ahead of Hancock in a tight battle with only a few weeks remaining.

The Compact point battle is really tightening up as well heading in to the final stretch. Three drivers remain in the hunt with only 66 points separating them. Brogan Rehklau out of Waldron, Michigan has been closing the gap on the Compact point lead over the last couple months, but suffered a bit of a set back last week after jumping early on a late restart which cost him the feature win. Rehklau made up for it this week, getting by current point leader Jeff Foks Sr. to pick up his ninth feature win this season and cuts Fok’s point lead to 25. Foks’ second place finish in the race limited the ground Rehklau made up in the standings. Cameron Tusing finished third with Jason Deshler, who was leading the point standings earlier this season and now sits third, finishing fourth. Ken Watts ended up fifth.

Satch Crispen and Roscoe Stetten had a pretty good battle early in a caution filled Bomber B Main. Crispen got the lead at the start, but Stetten battled Crispen and was able to take the lead after a lap two restart. Late in the race, Justin Gamber began to close in on Stetten. Gamber made a nice move to the inside of the Adrian, Michigan driver coming off the final corner to the checkered flag. Unfortunately for Gamber, something broke under the rear end spraying out a shower of sparks from under the car just as he had gotten alongside Stetten coming off the final corner. It was Stetten’s first feature win of the year. Gamber’s ailing car crossed the finish line in second followed by Crispen, Ryder Price and Scott Barnhart.

This Labor Day weekend, Oakshade Raceway will host its final American Late Model Series event of the season, paying $2,000 to win on Saturday, September 2nd. Also in action will be UMP Sportsman, Bombers and Compacts with gates opening at 4pm, hot laps at 6pm and racing at 7pm. 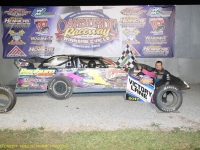 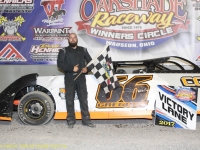 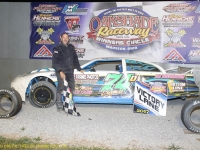 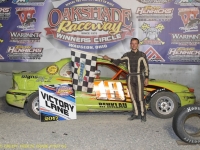 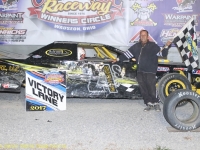