Mother Nature did her best to thwart the scheduled racing program at Oakshade Raceway on Saturday night. The forecast high temperature and heat index caused race officials to push the scheduled race time back one hour to 8pm. Then, a storm rolled through with gusty winds and downpours just after hot laps at around 7:30pm. Track crews had a difficult time running in the track with the high humidity and lack of sunshine, but with the help of the race car drivers the track eventually came around and made for some extremely fast racing.

Holland Ohio’s Steve Kester picked up his first UMP Late Model feature win of the season despite some stout competition. It was Ryan Missler who rocketed out to a huge lead just after the drop of the green flag. Missler appeared to have the car to beat until he slammed into another car that had spun in turn two. That would put an end to Missler’s night after only six laps. The lead would turn over to three-time track champion Rody Schroyer. Another caution would come out for Matt Shippley’s stopped car one lap later and on the ensuing restart, Steve Kester would get by Schroyer for the lead. Rusty Schlenk, who was celebrating his birthday Saturday night, got by Schroyer for second soon after. Caution flags continued to fly for the remainder of the race with Schlenk trying to figure out a way around Kester. He worked the high side and tried the bottom a couple times to no avail in a bid to find capture his 200th win. That milestone will have to wait as Steve Kester held on to take the checkered flag with Schlenk settling for second. Joe Godsey from Edinburgh, Indiana, finished third with defending track champion Devin Shiels fourth. Schroyer slipped back to finish fifth.

Mike Jessen from Berkey, Ohio, started on the pole of the UMP Sportsman feature and led from flag to flag to earn his second feature win in 2019. Jerry Signor, fresh off his very first sportsman win two weeks ago, pursued Jessen most of the race. Signor was able to close up on Jessen in lapped traffic, but could not make the pass and finished in second. Brandon Gregory’s third place run kept him atop the Oakshade Raceway sportsman point standings, but now with only a slim nine-point advantage over Jessen. B.J. Gregory ended up fourth with Karl Spoores finishing fifth.

Curt Dickie looked strong early in the Hot Rod Welding & Engineering Bomber A Main, leading the first half of the race after starting on the pole. Adam Noonan pressured Dickie for much of that time and eventually was able to get the lead from Dickie. His lead wouldn’t last too long as a hard-charging Jeff Foks Jr. would get by on the high side to take the lead on lap 11. The Holland, Ohio, driver would go on to win his second A Main of the season. Noonan finished in the runner up spot followed by point leader Terry Rushlow in third. Gabe Mueller was fourth and Bubba Cundick gained 10 positions to end up fifth.

Cameron Tusing and Cory Gumm had a heated battle for the lead in the Napa of Swanton Compact feature event. Tusing led at the drop of the green flag after starting on the pole and Gumm was immediately putting on the pressure. Gumm would get up alongside Tusing and the two drivers banged doors a few times. Eventually, Gumm would take the lead on lap five. Tusing would battle back and Nathan Goodman made it three-wide for the race lead, but the Hillsdale, Michigan, driver would prevail for his fourth consecutive feature win. Goodman would finish second followed by Brogan Rehklau and Eric Carr. Tusing slipped back to finish fifth.

A wild and crazy Hot Rod & Welding Bomber B Main would finish off the night’s racing action. Dylan Burt took the lead at the start, but spun in the first corner resulting in a complete restart with Burt at the tail. Steve Reeves would lead the first couple laps, but Burt battled back to take the lead by lap three. Wauseon, Ohio’s Adam Lantz would close in on Burt and took the lead on lap seven and never looked back. Reeves would finish second followed by Shane Nofzinger. Burt finished the last few laps with a flat right front tire and managed to hang on to a fourth place finish. Bill Reeve’s Jr. was fifth.

This weekend is a big one at Oakshade Raceway. It is the rescheduled 30th Annual Barney Oldfield Race paying $5,500 to win for UMP Late Models. UMP Sportsman, Hot Rod Welding & Engineering Bombers and the Napa of Swanton Compacts will also be in action. Gates open at 4pm, hot laps at 6pm and racing begins at 7pm. Pit passes are just $25 and general admission is only $14 for ages 12 and up. 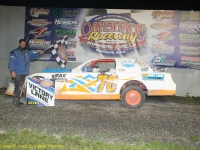 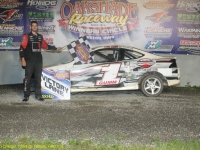 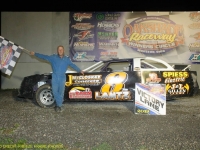