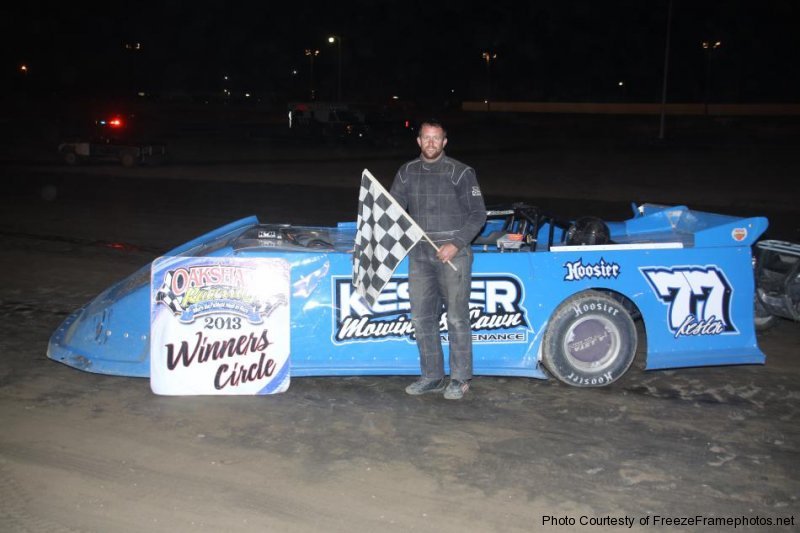 The roofs were off of the UMP Late Models on their final night of competition this season at Oakshade Raceway to allow race fans a better view into the drivers compartment. Steve Kester started on the pole of the season’s final 25-lap UMP Late Model feature event, but slid up high in turn three allowing Ryan Missler to take the lead. Kester fought back to the inside and regained the lead on the second lap. Several cautions kept the field tight the first half of the race, but Kester managed to open up a decent advantage over Missler during a long green-flag run during the second half of the race. Missler quickly closed back in on Kester in the final few laps and got a run on him coming off the final corner on the last lap. With the checkered flag in sight, both drivers shot down the front stretch, side by side, with Kester just edging out Missler by inches at the line. Devin Shiels finished third followed by Brian Ruhlman and Chris Keller.

Defending Sportsman Track Champion Mike Jessen took a small chunk out of Tim Line’s point lead going into next week’s Season Championship Night with his sixth feature win of the year. After a couple early cautions, Jessen had to fend off Jim Scout to maintain the lead after starting on the pole. Shortly after halfway, Scout slipped back a couple spots when his hood folded back obstructing his view. Scout then retired to the pits. Jessen went on to pick up the easy win and cut Line’s point lead from 68 down to 55. Bob Gregory barely held off Rusty Smith for a second place finish. Line finished fourth and Jeff Geis was fifth.

Terry Rushlow hung on to win his third Bomber A Main win of the year to increase his point lead to 43 over Adam Noonan. Rushlow started on the pole and led from flag to flag, despite pressure from defending champion Jeff Foks who dove to the inside of Rushlow racing to the checkered flag. Foks came up just a bit short and settled for a second place finish. Championship contender Noonan was third followed by Steve Morris and Chris Sands.

Amanda Shammo picked up her first Hornet feature win after leading the entire distance of the race and holding off Brandon Myers. Cody Laney, who maintains and insurmountable 328 point lead, ended up third. Brandon Leighton and Breanna Franks were the rest of the top five finishers.

Terry Rushlow Sr. was the early leader in Sport Compact feature racing action until Cory Gumm took command on lap two. “Sparky Marky” Gillingham closed in late and got by Gumm with just two laps remaining. Gillingham’s victory got him within a single point of Austin Casteneda’s championship points lead. Five Sport Compact drivers are still mathematically in contention for the track championship that will be decided next weekend. “Junior” Jerry Hoot took second in the race followed by Gumm, Rushlow, and Regan Ford.

Garry Domoe earned his first feature win of the season in the Bomber B Main after leading from flag to flag. Second-place finisher Tim McNicol was unable to reel in Domoe for any kind of challenge for the lead. Curt Lancaster, Skeet Reckner and Roscoe Stetten were the rest of the top five finishers.

The final race of the night, the Bomber C Main, featured the most lead changes of the evening’s feature events. Maverick Wright led at the start with Colin Walker all over him. Walker got into Wright causing him to spin in turn two on the second lap which brought out the caution. Walker was penalized for rough driving and joined Wright at the tail of the field for the restart. That incident turned the lead over to Derek Zuver who held it until Nathan Goodman got by on a restart after another caution. Goodman fell off the pace the very next lap and Henry Walls Jr. became the final leader of the race. Shawn Sharp was running second on the final lap and spun in turn two allowing Maverick Wright to take over second. Wright spun on the same lap in turn four bringing out the caution which jumbled up the top five for a one-lap dash to the finish. John Gamber ended up finishing second behind Walls followed by Zuver, Walker and Derek Morris.

2013 Champions will be determined on Season Championship Night for Sportmen, Bombers, Hornets and Sport Compacts Saturday, September 21. Gates will open at 4pm with racing at 7pm. 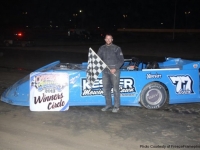 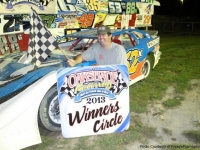 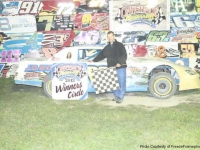 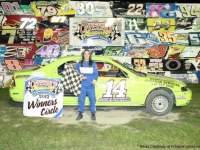 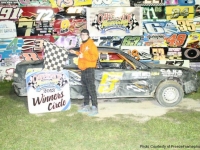 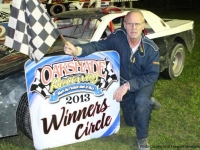 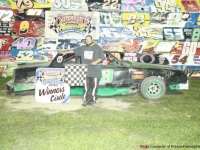