Another great field of cars filled the pits for Wauseon Machine & Manufacturing Night at Oakshade Raceway on Saturday with Matt Miller earning his first feature win of 2018 at Oakshade.

Despite threatening skies and reports of rain all around the area, the racing action rolled on with the first of the Wauseon Machine & Manufacturing feature events taking the track. Matt Miller, out of Whitehouse, Ohio, started inside the second row of the UMP Late Model feature and wasted no time getting out in front of the rest competitors. Miller opened up a big lead and smoothly worked his way through lapped traffic until the yellow flag flew on lap 19. After another quick caution one lap later, last week’s feature winner Rusty Schlenk found himself in the second position after starting ninth. Schlenk and Miller battled for the lead the final five laps with Miller running the high line through the corners to hang on and pick up the victory. Devin Shiels finished third followed by Ryan Missler and Dusty Moore.

With his third place finish, Shiels extended his point lead over both Steve Kester and Ryan Missler. Kester’s championship hopes may have gone up in smoke after it appeared something terminal with the engine happened while he was leading his heat race earlier in the night. Kester borrowed a ride from another driver to make the feature and ended up finishing 15th which dropped him to 97 points behind Shiels. Only three more Oakshade UMP Late Model point events remain on the schedule for this season.

Tecumseh, Michigan’s Mathew Chapman is making a run for the AmeriGas UMP Sportsman championship at Oakshade Raceway after picking up his sixth feature win of the year. Despite skipping opening night for prom, Chapman sits just seven points behind point leader Mike Jessen. Chris Keller, piloting the 73 car, made Chapman earn the win and eventually settled for a second place finish. Jerry Signor finished third with Rusty Smith, who is third in points, ending up fourth. Jessen finished fifth. It was the third consecutive feature win for Chapman.

The Hot Rod Welding & Engineering Bomber A Mains have been the Jeff Foks and Chris Henry show all yearlong as the two drivers have hogged all the feature wins. Saturday’s Wauseon Machine & Manufacturing Night feature was no different. Jeff Foks Jr., from Holland, Ohio, took the lead after starting on the outside of the front row. Chris Henry started right behind Foks and eventually positioned himself in second. A lap 11 caution would tighten the field and give Henry a shot at Foks in the remaining four laps. The two drivers raced side by side, but Foks was able to hang on and win his fifth A Main of the year. Henry settled for second followed by Rich Riffe, Terry Rushlow and Dylan Hough.

A pile up on the first lap of the Wauseon Machine & Manufacturing Compact feature event took out point leader Eric Carr and now the top three in points are separated by less than 15 points. It was a good night, however, for Holland, Ohio’s Ken Watts who picked up his first feature win of the season. Last week’s feature winner, Cory Gumm, ended up second with Nathan Goodman finishing third. Carter Murday and Josh Proffitt were the rest of the top five finishers.

Ryder Price started on the outside of the front row in the Hot Rod Welding & Engineering Bomber B Main and had the field covered. The Morenci, Michigan driver opened up a big lead over the rest of the field and not even a lap three caution that bunched the field back up would help any of his pursuers. Zach Stotz finished a distant second behind Price, but had his hands full in trying to hold off Chuck Stuckey and Joe Nickloy who finished third and fourth respectively. Shane Estes was fifth.

Oakshade Raceway is back in action on Saturday August 25th with another full racing program of UMP Late Models, AmeriGas UMP Sportsman, Hot Rod Welding & Engineering Bombers and Compacts. Gates open at 4pm with hot laps at 6pm and racing at 7pm. 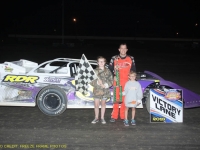 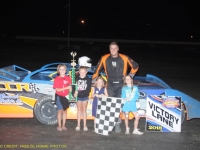 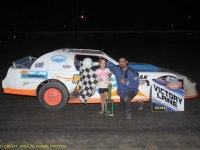 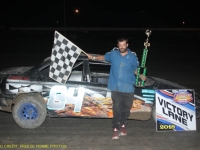 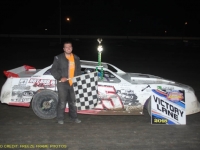