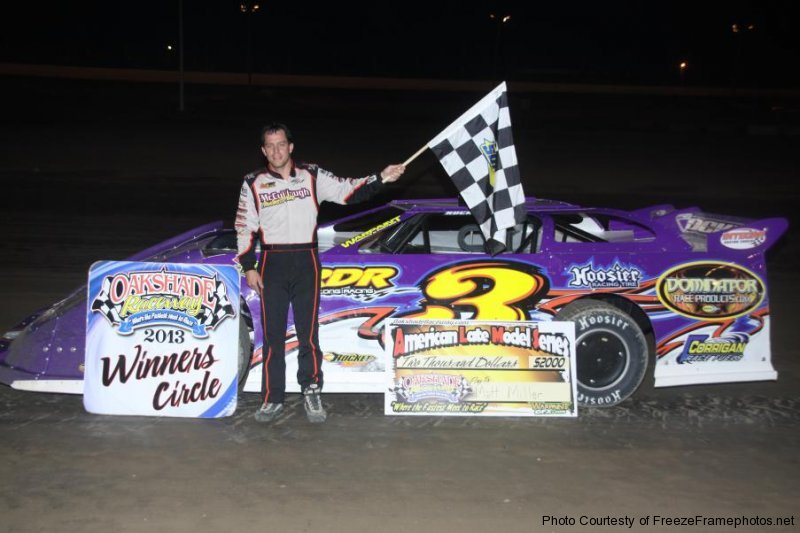 The 1991 Oakshade Raceway Track Champion started on the outside of the front row of the ALMS feature and took command at the drop of the green flag over pole-sitter Jeff Babcock. The only caution period of the race came out on lap two for Kevin Reeve from Hanover, Michigan after he had problems in turn 4. The final 28 laps were run caution free with Miller leading the entire distance. Brian Ruhlman, the 2012 ALMS champion, got by Babcock for second and tried to reel in Miller while negotiating through lapped traffic. Ruhlman was unable to make much of a dent in Miller’s lead and started to slip back as Babcock reclaimed the second position about halfway through the race. Ruhlman, Babcock and Dona Marcoullier had a good battle going for the second through fourth positions late in the race, about half a lap behind Miller who went on to win his third Oakshade Raceway feature race of the year. Ruhlman got back around Babcock to finish second with Marcoullier, who unofficially wrapped up the 2013 track championship last week, finishing third. Babcock held on for a fourth place finish with Jason Jaggers from Wyanet, Illinois, rounding out the top five.

After a set back the week before, Tim Line was back in top shape and eventually took the lead over Mike Jessen after battling early in the Sportsman feature. A big pile up on lap three involving Richard Patton, Joe Smith, Jamie Grochowski and Chane Stuckey tore up a few good race cars and set up a double-file restart which gave Jessen another shot at Line for the lead. Line had other ideas and shot out to a big lead over Jessen who was last week’s feature winner. It was the eight feature win of the year for Tim Line, which only slightly increased his point lead over Jessen with two races remaining this season. Jessen’s second place finish still keeps him alive in the championship points race, 68 points behind Line. Bob Gregory is third in points and finished third in the race ahead of Bob Krumm and Jim Scout.

Richard Riffe, Greg Detray and newlywed Jeff Foks raced three-wide for the lead at the start of the Bomber A Main with Riffe eventually coming out on top. Foks moved into second and pressured for the lead until Riffe spun out while leading on lap seven which brought out the caution flag and turned the race over to the defending champ. Foks went on to pick up another easy victory, his ninth of the year, which moved him back up to third in points behind Adam Noonan and Terry Rushlow. Rushlow finished the race second with Chris Sands third. Rick Dixon started tenth and drove to a fourth place finish with Detray slipping back to end up fifth.

An ugly incident on the first lap of the combined Hornet/Sport Compact four-cylinder classes brought out the red flag when Kacy Crispen got crossed up exiting turn four and slid back up in front of traffic causing a hard multi-car crash. Also caught up in the wreck were Jeff Goodman, Breanna Franks and John Anderson Jr.

In Sport Compact action, “Sparky Marky” Gillingham Jr. and Matt Brazeau battled side by side the final two laps for the lead. Brazeau, who was on the inside, pushed up into the side of Gillingham in the final corner and got his car a little out of shape which was all Gillingham needed to take the checkered flag. “Junior” Jerry Hoot beat out Austin Casteneda for third with Terry Rushlow Sr. finishing fifth.

In Hornet action, Cody Laney worked his way up toward the front of the pack and was leading the Hornet class until he had to check up for another car which allowed last week’s feature winner, Brandon Myers, to get by and win his second feature event in a row. Breanna Franks followed Laney with a third place finish with Abby Burton and John Anderson Jr. rounding out the rest of the top five finishers.

Brandon Clark from Lyons, Ohio, led flag to flag in the Bomber B Main after starting on the pole. Joe Heffner ran second the first part of the race until getting caught up in a lap six incident with Craig Dippman and Derek Morris which ended the night for all three drivers. Clark picked up the victory over Satch Crispen and Terry Rump. Roscoe Stetten and Donovan Paskan both started deep in the field and finished fourth and fifth respectively.

Zach Tipton and Shaun Sharp battled for the lead in the Bomber C Main. Sharp was able to take the lead briefly after a lap six restart, but Tipton fought back and regained the lead. Craig Strow’s spin as the field was taking the white flag set up a one-lap race to the finish and a final shot for Sharp at Tipton, but Tipton held on to win over Sharp, Joe Elliot, Derek Zuver and Scott Robertson.

Usually held on Sunday afternoons, a special 200-lap/Two Hour Enduro race will be run on Saturday evening, September 7. Gates open at 4pm and the race time will be at 6pm. General admission for the Enduro is just $5! 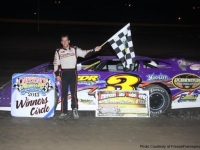 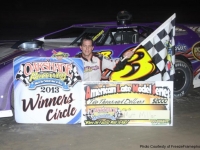 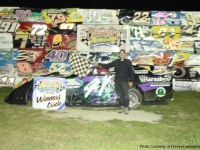 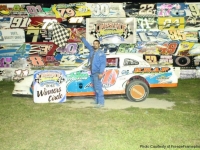 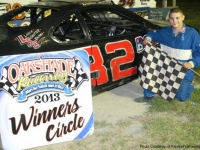 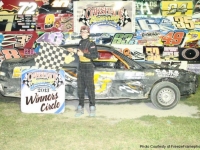 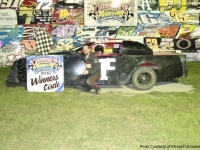 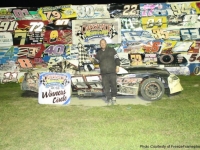