It may have only been the second night of competition this season at Oakshade Raceway, but Wallace Racing Products Night did not disappoint. It was highlighted by Ryan Missler’s dominating performance in the UMP Late Model feature event.

Herb Reich started on the pole of the Wallace Racing Products Night UMP Late Model feature and led the first couple laps until Steve Miller lost a wheel to bring out the caution flag. Reich elected to restart in the outside row which allowed Bellevue, Ohio’s Ryan Missler to restart to his inside. Missler darted out to the lead on the restart and never looked back. A couple laps later, Rusty Schlenk fell off the pace and brought out the yellow flag after slowly limping down the backstretch. Schlenk would be done for the night. A few more cautions would keep Missler from getting too far out in front of the field, but no one could catch him as he went on to pick up his first Oakshade win of the season. Reich held on to finish second with last year’s Barney Oldfield Race winner Stever Kester finishing third. Mathew Chapman started deep in the field and managed a fourth place finish with Mike Bores ending up fourth.

Brandon Gregory made it two in a row after fending off Mike Jessen in the Wallace Racing Products UMP Sportsman feature. Jessen kept the pressure on for much of the race but had to settle for a second place finish. Jerry Signor started sixth and worked his way up to finish third with pole-sitter Joel Morton slipping back to end up fourth. Custar, Ohio’s Karl Spoores rounded out the top five finishers.

Terry Rushlow out of Holland, Ohio made the most out of starting from the pole in the Wallace Racing Products, Hot Rod Welding & Engineering Bomber A Main. Rushlow led every lap and held off point leader Jeff Foks Jr. to pick up the feature win. Adam Noonan finished third followed by Dean Taylor and Adam Lantz.

Waldron, Michigan’s Brogan Rehklau got to the front early in the Wallace Racing Products, Napa of Swanton Compact feature event. Cory Gumm kept the pressure on for the race lead for most of the race, but Rehklau took the win in his newly built race car. Camerson Tusing finished third with Nathan Goodman driving to a fourth place finish after starting 12th. Kevin Murday was fifth.

The final event of the night was the Wallace Racing Products, Hot Rod Welding & Engineering Bomber B Main and attrition was the story of this race. Sixteen drivers took the green flag, but only four took the checkered. Logan Hough took the early lead, but slipped up high in the corner which allowed Gabe Mueller to take the top spot. After an early caution, Brian Miller slammed into race leader, Mueller, after the yellow flag flew. Miller retired to the pits, but Mueller continued on as the leader for a while, but mechanical issues would force Mueller to the pits. In the end, it was an emotional win for Clayton, Michigan’s Donovan Paskan after suffering through some personal loss during the off season. John Martis recovered from an earlier spin to finish second ahead of Steve Reeves and Dave McMannamy who was the last driver still on the track. Jeff Reliford, who pulled off the track earlier, was credited with fifth.

One of the marquee events that takes place each summer at Oakshade Raceway is scheduled for this coming weekend. It is the 30th Annual Barney Oldfield Race which is an American Late Models Series event and pays $5,500 to win. Come out Saturday, June 15 to see if Stever Kester to repeat as the race winner. UMP Sportsman, Hot Rod Welding & Engineering Bombers and Napa of Swanton Compacts will also be in action. Gates open at 4pm with hot laps at 6pm and racing at 7pm. 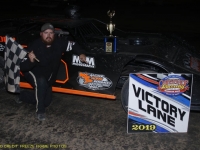 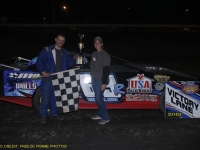 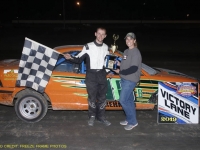 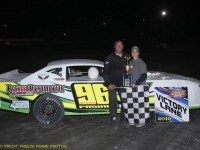 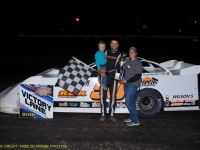