WAUSEON, OH – The American Late Model Series (ALMS) present by Sunoco returned to Oakshade Raceway for the first time since 2019 and produced one of the most exciting finishes of the season with Casey Noonan and Jeep Van Wormer duking it out to the checkered flag. In the end, Noonan was able to drive his damaged car to his first victory of the year.

Terry Rushlow started on the pole of the 30-lap ALMS feature event and led the first third of the race. Rusty Schlenk, winner of the last two consecutive Oakshade features, started to close in to challenge for the lead but engine woes forced him to pull out of competition by lap four.

Sylvania, Ohio’s Casey Noonan charged his way toward the front and snatched the lead from Rushlow on lap 11 and then proceeded to pull away from the rest of the field. Multiple caution periods the second half of the race wiped out Noonan’s advantage and helped Jeep Van Wormer work his way up into contention after starting ninth. Late in the race Van Wormer got to the inside of Noonan coming off turn two and the two drivers made contact causing Noonan to do a 360. At the same time, a spin further back in the field would bring out the caution flag. Since Noonan did not stop, he was able to get his position back as the leader with a two-lap shootout to the finish that didn’t disappoint.

Noonan held off Van Wormer until the white flag lap. Van Wormer got to the inside of Noonan in the first set of corners and came off turn two with the lead. Noonan charged back and dove to the inside of Van Wormer going into turn three and made more contact, muscling his way back to the lead. With fans on their feet, Noonan drove off turn four and took the checkered flag. Van Wormer settled for a second-place finish with Oakshade point-leader Devin Shiels third. Colin Shipley posted a fourth-place finish with Dusty Moore fifth.

The UMP Sportsman feature followed with Ian Palmer starting on the pole. Palmer faltered a bit at the drop of the green flag which slowed up the inside lane and allowed outside polesitter Mike Jessen to take the lead.  Jessen would lead the first half of the race until Carter Murday made a strong move around the outside of Jessen on a restart after a caution. Sylvania, Ohio’s Rusty Smith got by Jessen for second a couple laps later. After another caution period, Smith was able to take the lead from Murday after the restart. Murday would retire to the pits soon after with a flat tire. Smith went on to pick up his second feature win of the year with Oakshade point-leader Josh Robertson finishing second ahead of Mike Jessen. Ian Palmer recovered for a fourth-place finish with Joe Smith ending up fifth.

Bomber driver Adam Lantz added $450 to the winners take of the Bomber A Main as part of a benefit for former racer Dwight Gilbert. Lantz and Jeff Foks Jr. battled hard early in the Bomber A Main trading the lead back and forth the first few laps. Lantz finally put his car in front of the field and led for a while. Kolin Schilt caught Lantz and got to his inside to take the lead away. Lantz tried to squeeze back to the inside of Schilt and spun in turn three to bring out the caution. On the restart, Schilt lost control coming off turn two while leading and slammed into the tire barrier on the inside of the track ending his night.  Foks, from Holland, Ohio reassumed the lead and went on to earn his second consecutive Bomber A Main win. Gabe Mueller once again finished in the runner-up position and leads the Bomber point standings. Donnie Ringman held off Justin Gamber to finish third and Dalton Bishop was the fifth-place finisher.

Cory Gumm and Eric Carr battled for the lead early in the Compact feature event with Gumm getting the advantage. Gumm was sent back to third during a midrace caution after he was penalized for jumping an earlier restart. Carr took over as race leader but could not fend off the hard-charging Hillsdale, Michigan, driver. Gumm went on to pick up his second feature win of the season and Carr followed to finish in second and maintain his substantial Oakshade point lead. Ryan Okuley finished third followed by Jason Deshler and Jeff Goodman.

R.J. Cornett was competing for the first time in full-size vehicle racing after experience running go karts. He started on the pole of the Bomber B Main and led the first part of the race. Dylan Herman spun while battling with Brad Eitniear for second to bring out the yellow flag. On the ensuing restart, Eitniear from Wauseon, Ohio, took the lead from Cornett and drove away for the easy win. Cornett finished second followed by Jeff Wells, Chris Bleikamp and Dave McMannamy.

The Dirt Track Truck Series will make its debut at Oakshade Raceway on Saturday, June 5th. Also in action will be the UMP Late Models, UMP Sportsman and Bombers with gates opening at 4pm and racing at 7pm. 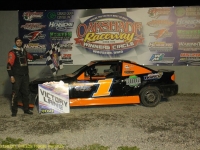 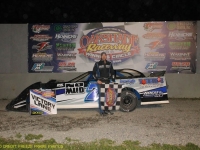 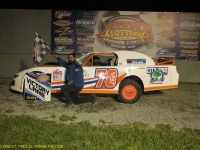 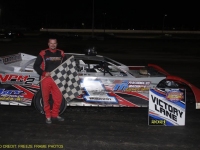 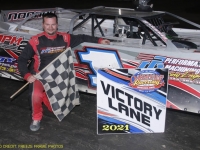 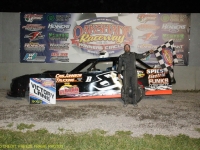