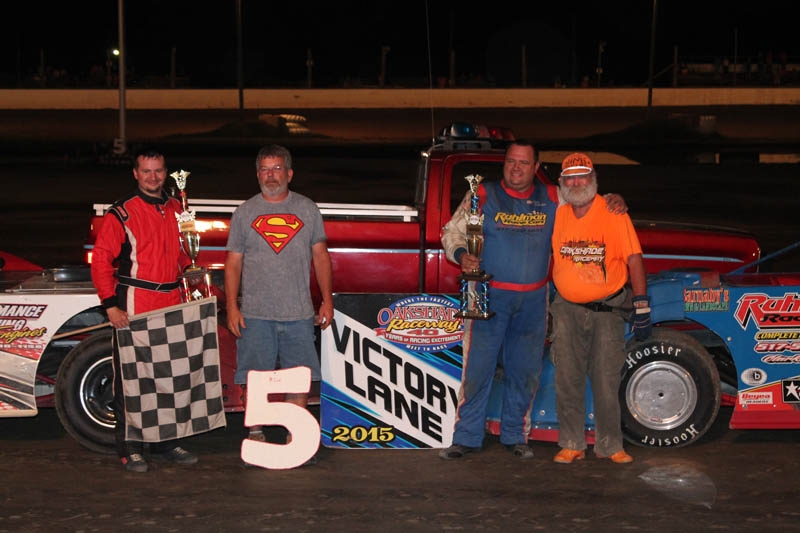 Brian Ruhlman and Casey Noonan each picked up UMP Late Model feature wins in the Dual Push Truck Challenge at Oakshade Raceway on Saturday night keeping both drivers atop the point standings with Season Championship Night just a couple weeks away.

Devin Shiels jumped out to a big lead at the start of the first of two 25-lap UMP Late Model feature races, but a caution on lap three tightened the field back up for a double-file restart. Casey Noonan took the lead from Shiels on the restart and Brad Eitniear followed him into second. Eitniear had a hard time with a lapped car on lap 10. Kelly Wahl was a lap down and slammed into the side of Eitniear as he attempted to pass on the inside. Eitniear eventually began to fade back before retiring to the pits. Rob Anderzack started eighth and took the lead from Noonan on a lap 12 restart. Anderzack pulled out to a large lead and appeared he might be on his way to his first Oakshade Raceway UMP Late Model win. Clarklake, Michigan’s Brian Ruhlman had other plans. The point leader began to close in on Anderzack and passed him for the lead with just two laps to go. Ruhlman picked up his fifth win of the season and maintains an 84 point advantage over Noonan. Anderzack settled for the runner up position with Noonan third. Chris Keller finished fourth and Shiels was fifth.

The top six finishers in the first UMP Late Model feature were inverted for the start of the second 25-lap feature which meant Swanton, Ohio’s Dusty Moore would start on the pole. He pulled out to a big lead early in the race, but Deven Shiels tracked him down. The two drivers raced side by side until a lap seven caution would slow the field. One lap after the restart, Casey Noonan took command of the race. The Sylvania, Ohio driver pulled away and earned his third checkered flag of the year which keeps him in the points race going into the final two weekends. Shiels finished second with Brian Ruhlman taking third. Chris Keller and Rusty Schlenk were the rest of the top five finishers.

Fresh off his first UMP Sportsman win last week, Graeme Short was on the pole and looking to make it two in a row. Short led the first seven laps, but a caution for a wreck involving Shaun Sharp, Scot Mills, Roger Weirich and Billy Brown would change that. Short was a little slow coming up to speed on the restart which allowed Rusty Smith and Mathew Chapman to get by. Chapman took the lead and drove away from the field. It was the third feature win of the year for the Tecumseh, Michigan driver. Rusty Smith settled for second with Short taking third. Joe Derbeck was fourth and Drew Smith finished fifth.

Craig Dippman won his second consecutive Bomber A Main. The Oregon, Ohio driver started on the pole and led the entire distance. Chris Sands had a terrible night the week before, tumbling from leading the Bomber points down to fourth. His second place finish this week moved him back up to second, tied with Jeff Foks Jr. at being 10 points behind new point leader Skeet Reckner. Adam Lantz finished the A Main in third followed by Adam Noonan and Tim Hancock.

Brogan Rehklau started on the outside of the front row of the Sport Compact feature event and pulled away with the lead at the start. A spin by Cory Gumm would bring out the caution which eliminated Rehklau’s advantage. Richard Riffe from Toledo, Ohio got a good restart and took the lead from Rehklau and went on to pick up the victory. Rehklau settled for a second place finish followed by John Martis, Aaron Barrick and Randy Murday.

Garry Domoe and Richard Riffe battled for the early lead in the Bomber B Main. Domoe would win that battle, but a last lap pass would cost him the win. Gregg DeTray out of Swanton, Ohio took over the points lead last week after both him and Chris Sands had rough nights. DeTray made the last lap pass on Domoe to pick up the B Main win. Despite the feature win, DeTray fell to fourth in points, but is only 15 points behind Reckner in a very tight point battle in which the top five are separated by only 21 points. Domoe took a second place finish in the B Main followed by Riffe, Dylan Hough and Rayce Price.

The final race of the night was the Bomber C Main. Sylvania, Ohio’s Scott Hammer started on the pole and led from flag to flag to pick up his first feature win of the year. Scott Barnhart was challenging Hammer for the lead, but ended up spinning on the final lap. Jason Grames and Brian Barden both got by to finish second and third respectively. Barnhart ended up fourth with Joe Overmyer taking fifth. 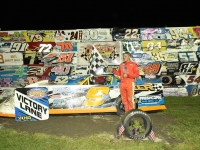 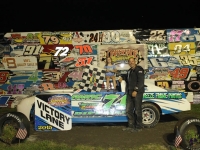 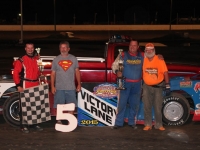 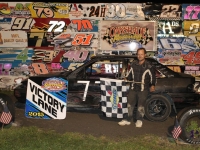 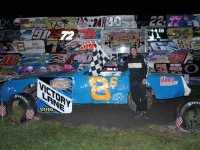 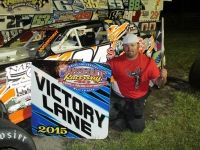