Schlenk, out of McClure, Ohio, started on the pole of the 25-lap feature and darted out to a sizeable lead over Mike Bores. Once Schlenk caught the tail end of the field and started working through slower traffic, Bores was able to make up a little ground, but then found himself under attack from Colin Shipley and a host of others. Shipley got around Bores and tried to track down the race leader. Shipley was unable to catch Schlenk who led every lap of the non-stop feature race. Devin Shiels and Casey Noonan got around Bores to finish third and fourth respectively with Bores settling for fifth.

Fresh off unofficially wrapping up his first track championship by a narrow margin, Adrian, Michigan’s Carter Murday got to the lead on the first lap of the Sportsman A Main feature event and drove away from the rest of the field. An early caution flag would tighten the field, but Murday would drive away once again with a great battle commencing for second between Mike Jessen and Karl Spoores. That battle would be settled soon after when Spoores slowed and retired to the pits on lap seven after his car began to smoke. Murday went on to pick up his fifth feature win of the season by nearly a 10 second margin over Mike Jessen who fended off Josh Robertson for second. Carter Schlenk and Jesse Jones were the rest of the top five finishers.

Adam Noonan started on the pole of the Dominator Super Stock A Main and led the first few laps. After a restart from an early caution, Noonan had his hands full trying to hold off Bronson Means as the two drivers battled side by side for several laps until Means finally took command. Kolin Schilt out of Stryker, Ohio, drove up from the middle of the pack to challenge Means for the race lead and was able to take the lead away with just a few laps left to take the checkered flag. Means settled for second followed by Adam Lantz in third. Noonan fell back to finish fourth with Dylan Burt rounding out the top five finishers.

Hillsdale, Michigan’s Cory Gumm made a bold three-wide move to the outside at the drop of the green flag to take the lead on the first lap of the Compact A Main after starting on the outside of the second row. Last week’s feature winner, Eric Carr, took advantage of Jason Deshler and Aaron Vanpelt racing each other hard for second and drove by both drivers to take the second position away, but he could not reel in Gumm who went on to post his second feature win of the season. Deshler would finish third followed by Vanpelt and Josh Bailey in fifth.

Next up was a caution-filled Dominator Super Stock B Main. Curt Dickie started on the pole and was able to stay in front of the all the chaos behind him. The Lyons, Ohio, driver led every lap and stayed out of trouble to pick up his first feature win of the season. Burt Sharp was running in the second position and spun coming off of turn four in front of a large pack of cars on lap two. Miraculously everyone made it through with no major contact. Jeff Wells spun a couple of times to bring out a couple of yellow flags and Brian Barber and Haley Dippman tangled on lap seven for yet another. The race distance ended up being shortened a couple laps as the time limit expired. Roscoe Stetten held off Zeke McNew to finish second with Ryan Clair and Gary Domoe the rest of the top five finishers.

Josh Beaver out of Toledo, Ohio, passed Chris Yockum for the race lead on the second lap of the Compact B Main, the final race of the evening. James Stamper would get by Lawrence Mullins later in the race for the second position and then retire to the pits a short time later with just two laps remaining. Beaver went on to pick up the victory with Mullins ending up second. Yockum finished third followed by Dave McVey and Matt Erne.

Oakshade Raceway will cap off the last three weekends of the racing season with some big events. Dippman Motorsports Night will take place on Saturday, September 10 paying $1,500 to win for the DIRTcar UMP Late Models, $500 to win for Sportsman, $450 to win for Dominator Super Stocks and $100 to win for Compacts plus other monetary awards and plaques for fast qualifier and hard chargers. Then on Saturday, September 17, it is the Papa Boiler Hot Rod Welding & Engineering Dominator Super Stock Spectacular paying $1,000 to win. The season will wrap up on Saturday, September 24 with Topless Night and the first ever Sportsman/Modified Dirt Duel paying $1,000 to win. Late Models, Sportsman and Dominator Super Stocks will have the option of racing with the roofs removed and the Sportsman and UMP Modifieds will be racing together in a combined class. Gates open at 4pm with hot laps/qualifying at 6pm and racing at 7:15pm each Saturday night. 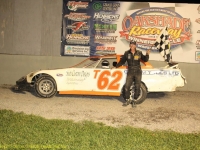 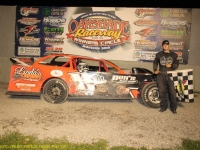 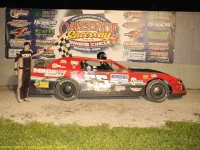 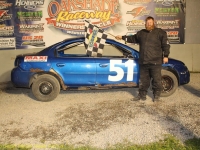 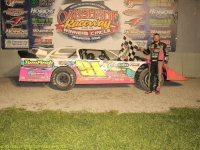