Pole-sitter Dan Wallace led the field into turn one at the start of the UMP Late Model feature and then slipped up high and lost a few positions. Devin Shiels took advantage and moved into the lead. Schlenk closed in on Shiels and pressured him for the lead. The McClure, Ohio, driver finally took over the top spot by lap eight and then drove away from the rest of the field. Shiels fought with Brian Ruhlman for second with the two drivers trading the position a couple times. Shiels was able to maintain his point lead with a second-place finish ahead of Ruhlman. Dusty Moore finished fourth and Colin Shipley gained the most positions to finish fifth after starting 19th.

Jeff Robertson led the first half of the UMP Sportsman feature with Rusty Smith knocking at the door. Josh Robertson took advantage of a mid-race caution and rocketed by the top three drivers on the outside shortly after the restart. Robertson, out of Defiance, Ohio, went on to win his second feature of the year. Smith held off last week’s feature winner, Carter Murday, to finish second. Jeff Robertson slipped back to finish fourth with Jake Gamber fifth.

Curt Dickie and Adam Lantz battled for the lead the first few laps of the Bomber A Main, trading the lead back and forth several times until Lantz finally got in front. Jeff Foks Jr. was hooked up in the top groove and took the lead away from Lantz late in the race. A late caution set up a one-lap shootout to the finish. Lantz dove the inside of Foks and Gabe Mueller ducked under Lantz for a three-wide battle for the lead down the backstretch and most of the way to the checkered flag. Foks, out of Holland, Ohio, managed to edge out Lantz for the win by inches. Mueller was a very close third followed by Chane Stuckey and Curt Dickie.

The Compact A Main had a lot of excitement at the front of the pack. Joe Carr passed Kaleb Hinkley to lead the first lap. Hinkley fought back and made a three-wide move under Joe Carr and Eric Carr to get back in front of the field. Eric Carr and Hinkley got together on lap four and Jason Deshler ducked under both drivers to take the lead. Eric Carr held on to second and tried to get the lead back from Deshler with the drivers making contact at least once. In the end, the Adrian, Michigan, driver held on for his first feature win of the season. Eric Carr settled for second. Dominic Morehouse finished third. Hinkley fought back to end up fourth with Jeremy Wilber rounding out the top five finishers.

Shane Estes got in front of the pack in the Bomber B Main at the drop of the green flag with Adrian, Michigan’s Cody Stetten pressuring in second. Stetten finally took the lead on lap four after a good side by side battle and went on to pick up the checkered flag. Estes finished second followed by Roscoe Stetten, Josh Corkwell and Garry Domoe.

Lawrence Mullins and James Davis got together battling for the early lead in the final event of the night, the Compact B Main. Devin Goodman, from Wauseon, Ohio, slipped under both drivers to take the lead. Gage Rushlow got to the inside of Goodman on the final try to steal the win away, but Goodman was able to edge out Rushlow at the finish line. Eli Kolodie started at the back of the field and drove to a third-place finish with Clayton Smith and Bruce Lentz the rest of the top five finishers. 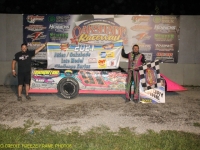 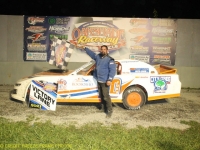 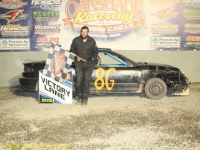 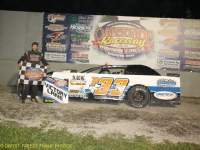 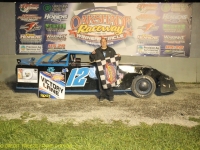 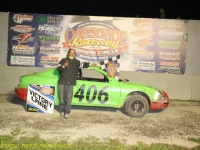