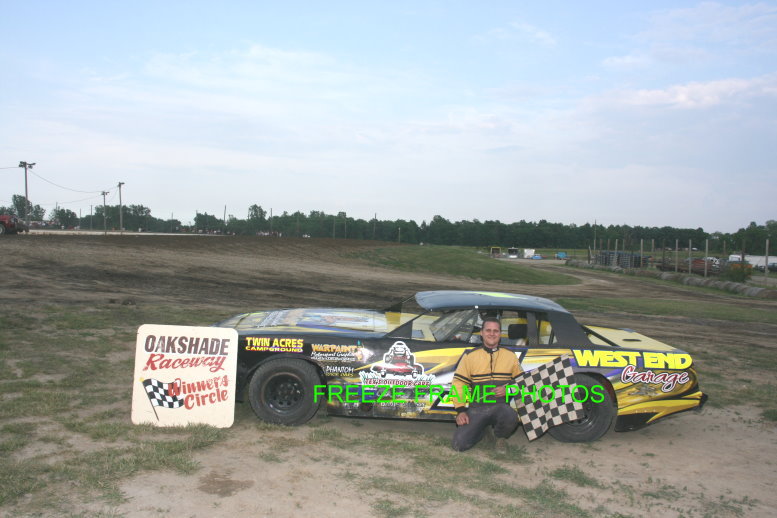 For the second week in a row, rain has cut short the racing program at Oakshade Raceway.

Track workers worked hard to get the track run in after a heavy downpour about an hour and a half into the show and managed to succeed allowing for a couple more heat events to be completed before another shower came and left the track a slippery mess forcing Oakshade officials to cancel the rest of the evening’s racing.

The fans were treated to some feature racing with the rained out UMP Bomber Features from the previous week kicking off the night’s action. Brian Przepiora took advantage of starting on the pole of the Bomber A Main to lead the entire distance and picked up his first feature win of the year.

Dan Dippman had a strong run going. after starting 19th, he worked his way up to sixth by lap eight, but then experienced mechanical problems and slowed to a stop on the track.

Chris Henry, trying for his second consecutive A Main win, also marched toward the front after starting deep in 18th and moved up to sixth when the entire rear end came out from under his car on lap 10 ending his night.

Przepiora went on to the easy victory over Brett Miller, Tom Ordway and Craig Dippman who gained the most positions to finish fourth after starting dead last. Jeff Foks Jr. was fifth.

The Bomber B Main featured a slew of lead changes with Dustin Sautter taking it away from Jamie Grochowski early on.

Jeff Geis took his turn out front passing Sautter on lap six. Two laps later, Geis was overtaken by Kevin Hanford who led for two laps until Danny Hogrefe took command and held off Hanford to win the Bomber B Main.

The Bomber C Main exhibited a lot of excitement with Rick Dixon leading the first five laps. Jody Burton took the lead away on lap six until Josh Montague passed him one lap later.

Montague held on to win with parts coming off other cars and action all over the track in the final few laps. Burton held on to finish second ahead of Jarrett Rendel, Rick Dixon and Justin Gamber.

Mike Miller and Justin Paxton won the only UMP Late Model heat events that were completed and Mike Jessen, Tim Fisher and Josh Steinacker were the UMP Sportsman heat winners.

Rain checks will be honored for those who attended the rained out show and will be valid for any one night the rest of the season. 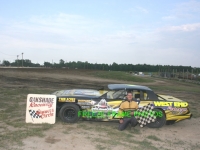 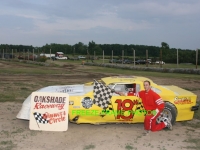 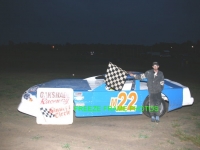