Noonan started on the pole and immediately jumped out to the lead over Dan Wallace at the start. The Sylvania, Ohio driver proceeded to open up a big huge lead with Steve Kester moving up to second and defend track champion Brian Ruhlman in third. With no caution flags to tighten up the field, Noonan spent much of the race navigating through lapped traffic which allowed Kester to close in slightly, but not enough to put any pressure on Noonan for the race lead. Ruhlman was able to close up right behind Kester in the battle for second, but couldn’t get by and settled for a third place finish. Devin Sheils was close behind in fourth with Mathew Chapman finishing fifth.

Bob Gregory led a four-wide battle for second between Bob Krumm, Rusty Smith, Billy Brown and Jamie Grochowski at the start of the Bill Reckner Memorial UMP Sportsman feature. A big wreck involving Smith, Grochowski, Roger Weirich and Dave “Gumby” Golembiewski Jr. took out some of the top contenders on lap three. Multiple caution flags kept the field tight and veteran driver Tim Fisher from Blissfield, Michigan, steadily worked up toward the front of the field taking second by lap nine. Fisher looked low on Gregory and Gregory moved down to take that line away. So Fisher looked to the outside and finally took the lead and went on to pick up the checkered flag. George Lindsey got by Gregory for second. Mike Jessen finished fourth with Bob Krumm slipping back to end up fifth.

Chris Sands took command at the start of the Bill Reckner Memorial Bomber A Main with defending track champion Gregg DeTray running second although neither driver would end up finishing. Pole sitter Roscoe Stetten slipped back at the start, but worked his way back to the lead by lap six. Stetten’s lead would last five laps until the 2014 Bomber Champion, Jeff Foks Jr., took the lead on lap 11. During a late caution for an incident involving Tim and Teri-Lynn Murphy, both Sands and DeTray retired to the pits before going back to green. Foks, from Holland, Ohio, cited the change in manufacturer of the body on his car as a huge improvement over last year during his victory interview after the race. Stetten held on to finish second followed by Tim Hancock, Skeet Reckner and Curt Dickie.

The Bill Reckner Memorial Sport Compact feature started off with some five-wide battling as the green flag dropped. Rick McDaniel held the early lead until Toledo, Ohio’s Richard Riffe got by on lap three. Riffe went on to pick up the easy victory over last year’s track champion, Brogan Rehlkau. Matt Brazzeau ended up third ahead of McDaniel and Cody Stetten.

A hard crash at the start of the Bill Reckner Memorial Bomber B Main involving Terry Rump, Duane Fletcher and Jeff Robertson Jr. resulted in a complete restart. Ryan Gorey jumped out to the lead once things got going. Gorey led the entire distance of the crash-filled race to pick up the feature win with Morenci, Michigan’s Dan Shaffer finishing second. Despite a lot of smoke at the start of the race, Tyler James car held up to finish third with Jarrett Rendel and Dylan Burt rounding out the rest of the top five.

Racing action continues this coming Saturday, May 14 at Oakshade Raceway with a full racing program of UMP Late Models, UMP Sportsman, Bombers and Compacts. Gates open at 4pm with racing at 7pm. 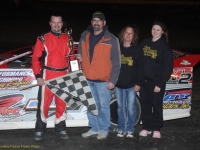 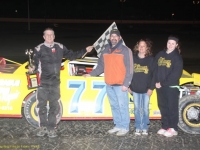 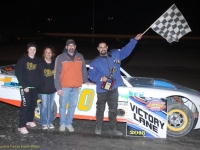 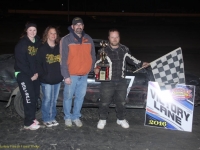 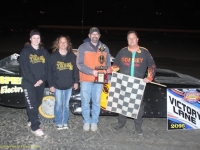