WAUSEON, OH – Race fans were treated with their fill of racing on Saturday night at Oakshade Raceway. Last week’s Season Championship program was completed and another full racing program ran, which saw Devin Shiels win the make-up UMP Late Model feature to cap off his fourth track championship and Rusty Schlenk earned the second feature win later in the evening.

Defending UMP Late Model track champion, Steve Kester led the first part the make-up Season Champion feature event with Shiels trailing. The Britton Michigan, driver finally got to the inside of Kester while working through lapped traffic. Shiels then went on to pick up his fourth feature win of the season. Kester was able to fend off Rusty Schlenk to finish second. Dusty Moore and Rich Ruff were the rest of the top five finishers.

The UMP Sportsman season champion wasn’t decided until the finish of the Season Championship feature event. Mike Jessen nursed a 15-point advantage at the start of last week’s Season Championship events over Sylvania, Ohio’s Rusty Smith. Smith won his heat event and then passed Karl Spoores for the lead in the feature on lap two. Smith went on to lead all the way to the checkered flag for his eighth feature win of the season. Despite missing the second week of competition, he finished far enough ahead of Jessen to unofficially earn back-to-back Oakshade Raceway UMP Sportsman track championships. Carter Murday finished a close second in the feature followed by Spoores, Jeff Robertson and Ian Palmer.

The tightest point battle entering the Season Championship program was between Gabe Mueller and Jeff Foks Jr. in the Bomber class. Mueller had an eight-point advantage entering the final race and the two drivers would start side by side in row four of the Season Championship Bomber A Main. Unfortunately for Foks, his night would end on the first lap with something breaking in the rear end. Adam Lantz out of Wauseon, Ohio, would get out to the early lead. Mueller closed in and the two drivers race side by side for the lead for several laps. Mueller then faded back a bit as Lantz went on to pick up his fourth Bomber A Main win of the season. Mueller finished second and unofficially becomes the 2021 Oakshade Raceway Bomber track champion. Donnie Ringman finished third followed by Roscoe Stetten and Josh Corkwell.

The Season Championship Compact A Main featured a large field of cars, lots of racing action and zero cautions. Jason Deshler and Joe Carr battled for the early lead with Carr eventually getting the advantage. Cory Gumm closed in, but the Wauseon, Ohio, driver was able to hold him off for his fourth feature win of the season. Deshler finished third with unofficial 2021 track champ, Eric Carr, ending up fourth. Aaron Vanpelt finished fifth.

A late caution in the make-up Bomber B Main feature set up a one-lap shootout to the checkered flag with Adrian, Michigan’s Cody Stetten leading the field. Stetten was able to hold off Jeff Strock to pick up the victory. Duane Fletcher finished third followed by Chane Stuckey and Dylan Herman.

The night’s regularly scheduled feature events kicked off with the UMP Late Model feature. Eric Spangler started on the pole and jumped out to the lead at the drop of the green flag. It didn’t take long for Shiels to enter the mix and challenge Spangler for the lead. The two drivers raced side by side for several laps. Spangler got into the rear of the 06 of Jake Rendel while trying to fend off Shiels for the lead. Rendel, who was running at the tail end of the lead lap, ended up spinning and brought out the yellow flag on lap 16 of the 25-lap race. With the field tightened up for the restart, Rusty Schlenk took off around the outside and got the race lead two laps later. Shiels would get by Spangler for second and managed to get back to the inside of Schlenk coming to the checkered flag. The McClure, Ohio, driver was able to hold on for his eighth Oakshade Raceway feature win of the year. Shiels settled for second with Spangler ending up third. Cody Bauer and Steve Kester were the rest of the top five finishers.

Rusty Smith got by Jake Gamber early in the UMP Sportsman feature and set sail to his second feature win of the night. Carter Murday also finished in the runner up position for the second time of the night. Josh Robertson drove to a third-place finish with Karl Spoores gaining six positions to finish fourth. Mike Jessen climbed eight spots to end up fifth.

After just claiming the Bomber Championship earlier in the night, Gabe Mueller was leading a caution-filled Bomber A Main when his car lost fuel pressure and slowed on the track early in the race. Donnie Ringman took over as the race leader until Adam Lantz marched his way up through the field and took the lead late in the race. Lantz then drove away to win his second A Main of the night with Ringman holding off Adam Noonan to finish second. Curt Dickie posted a fourth-place finish with 1988 track champion Roscoe Stetten finishing fifth.

Cory Gumm was the runner up in the make-up Compact A Main feature event earlier in the night and started on the pole of the second A Main. The Hillsdale, Michigan, driver led the entire distance for his seventh feature win of the year. Eric Carr started on the outside of the front row and earned a second-place finish ahead of Jason Deshler, Joe Carr and Todd Drewes.

The Bomber B Main was another caution-filled feature with Alvordton, Ohio’s Chris Bleikamp leading the entire distance. Things started heating up late in the race with Dylan Hough putting the pressure on as they approached slower back markers on the final lap. Bleikamp took the checkered flag just ahead of Hough. Jarrett Rendel gained 10 positions to finish third and Dylan Burt and Burt Sharp the rest of the top five finishers.

The final race of the night was the Compact B Main. Jeff Goodman was leading early until Gabe Rushlow got by. Shortly after taking the lead, Rushlow had issues with his right rear which took him out of contention. Joe Elliott, out of Osseo, Michigan, would take over the race lead with three laps remaining and pick up the win over his daughter, Megan Elliott. Goodman ended up finishing third ahead of Shelby Hulbert and Eli Kolodie.

Oakshade Raceway hosts the annual $1,000 to win Bomber Spectacular sponsored by Hot Rod Welding & Engineering on Saturday, September 18. UMP Late Models, UMP Sportsman and Compacts will also be back in action. Gates open at 4pm with hot laps at 6pm and racing at 7pm. 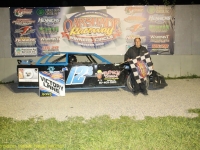 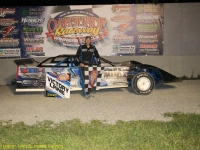 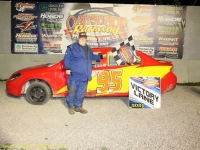 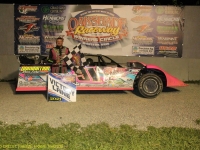 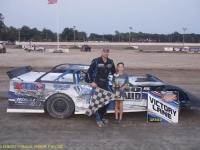 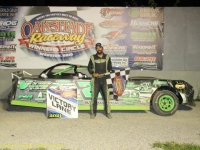 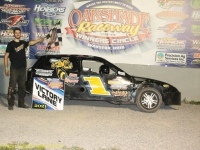 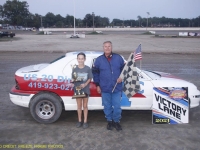 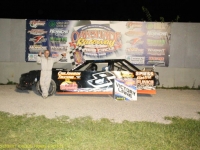 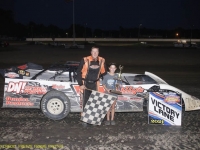 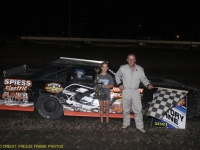