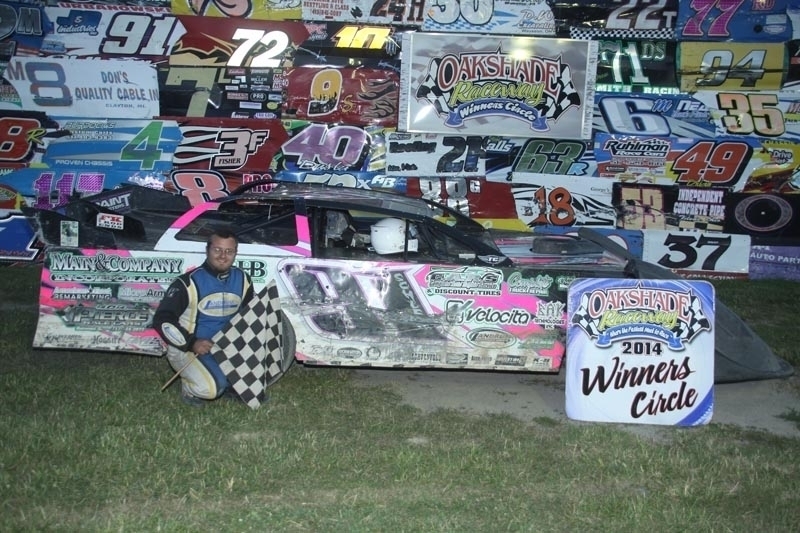 Schlenk took the lead over pole-sitter Jeff Babcock at the start of the race and proceeded to open up a straightaway advantage. Larry Kingseed’s spin on lap 14 tightened the field back up for a restart. Ruhlman was outside the top five on the restart and worked his way up to second near the finish of the race. He pulled to within a car-length of Schlenk, but ran out of laps to catch him. Schlenk managed to increase his points lead with his third win of the season. Ruhlman finished second for the second week in a row. Babcock slipped back to end up third followed by Steve Kester and Chris Keller who started 14th.

Last week’s UMP Sportsman feature winner Bruce Stuart got sideways on the first lap of this week’s feature and collected Tim Line and Jamie Grochowski which resulted in a complete restart. George Lindsey led the first five laps until the caution came out for Christopher Whitlock’s spin. On the restart, Tim Line and Mike Jessen got up alongside Lindsey to race three-wide for the lead. Both Line and Jessen got by to take the top two positions. With Line leading, Jessen continued to pressure him on the inside and took the lead on lap 13 of the 20-lap event. Line continued to fight back on the outside for the remainder of the race, but Jessen held on to win his third feature of the year. Grochowski took third with George Lindsey ending up fourth. Roger Weirich was fifth.

A hard crash slowed things on the first lap of the Bomber A Main after Richard Riffe got into Rick Dixon sending him into the wall. Steve Morris and Tim Hancock piled in hard. Another caution resulted in a second complete restart and once things got going, Jeff Foks was the man to beat. Mathew Chapman was running second and tried to challenge Foks, but lost it coming off of turn four and spun out. That turned second place over to Chris Sands who managed to mount quite a battle with Foks for the lead. In the end, Foks was able to pick up his third consecutive win and an extra $100 courtesy of Racers Connection and Complete Auto Repair Service. Sands wound up second for the second consecutive week followed by Terry Rushlow, Richard Riffe and Curt Dickie who started 23rd.

Best Performance Motorsports from St. Mary’s Ohio added some extra money to the first five finishers in the Sport Compact feature event. Nathan Shaffer took the lead at the start, but was quickly overcome by John Martis and Brandon Meyers who raced three-wide for the lead. Meyers took the lead on the outside and soon after “Sparky Marky” Gillingham began to challenge Meyers. Meyers went on to pick up his second feature win of the year with Gillingham finishing second. Brogan Rehklau was third with Cody Stetten fourth and Cory Gumm rounding out the top five.

Scott Hammer led from the pole at the start of a caution-filled Bomber B Main. Jim Remley took command by the second lap and tried to hold off a hard-charging Chris Henry. Despite pumping out a great deal of smoke, Henry battled to the inside of Remley for the lead for much of the race, but a few well-timed cautions managed to briefly save Remley’s lead. Finally, Henry was able to take the lead away with two laps remaining to claim his first feature victory of the year with Remley in second. Terry Rump wound up third with Dan Shaffer fourth and Ted Hill surviving to finish fifth after starting at the back of the field. Henry also pocketed an extra $50 from Racers Connection for the win.

The 25th Annual Barney Oldfield Race paying $5,000 to win will take place this Saturday, June 21 at Oakshade Raceway. It is also an American Late Model Series presented by Sunoco event. The Sportsman, Bomber and Sport Compact classes will also be back in action with gates opening at 4pm and racing starting at 7pm. 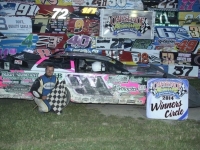 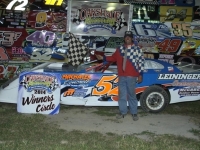 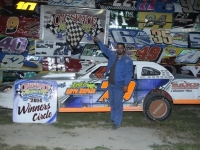 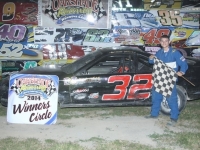 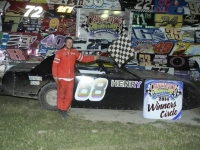