WAUSEON, OH – Saturday night’s UMP Late Model feature event at Oakshade Raceway had just about everything, including a three-wide race at the checkered flag. It was Chris Keller who narrowly edged out the win over Rusty Schlenk while both drivers split around a lapped car.

A couple of big wrecks marred the early parts of the 25-lap UMP Late Model feature. The first happened on lap three and involved Bob Mayer, Hillard Miller, Mike Bores and B.J. Gregory. On the ensuing restart, the red flag flew shortly after going green when at least nine cars piled up in turn two completely blocking the track.

Oakshade Late Model point leader Casey Noonan did not have a good night. He pulled off the track earlier in the evening during his heat race with an issue which forced him to start at the tail of the feature. Noonan wouldn’t make it to the finish and retired to the infield only a handful of laps into the event.

Dusty Moore had stayed in front of the early wrecks, leading the race after starting on the pole. Unfortunately for Moore, his car would erupt into a fireball coming off turn four while leading on lap 11. Moore got his car slowed down and stopped in the infield where track crews quickly extinguished the fire. Moore climbed out uninjured, but he was done for the night.

That turned the lead over to Adrian, Michigan’s Chris Keller with Rusty Schlenk running second. After the lap 11 restart, Keller was able to open a gap between himself and Schlenk and seemed to be on cruise control to an easy win. That was until Keller caught some of the back markers who were trying to stay on the lead lap. Keller got stuck behind Doug Baird who was running the same line as Keller. Keller kept trying to get to the inside of Baird, but Baird hung tough and continued to run the low groove. Schlenk saw what was happening in the last few laps and closed in. On the final lap, Schlenk jumped to the outside going down the backstretch while Keller squeezed to the inside of Baird as they entered turn three. Keller and Schlenk came off the final corner in a dead heat with the lapped car in the middle between them. Keller somehow managed to keep Schlenk from picking up his fourth Oakshade feature win by the nose of his car. Defending track champion Steve Kester finished third followed by Colin Shipley and Steve Miller. Devin Shiels sixth-place finish was good enough to regain the point lead after Noonan’s troubles.

A wreck just after the start in the UMP Sportsman feature brought out the only yellow flag of the race which resulted in a complete restart. When the green flag flew once again, Rusty Smith out of Sylvania, Ohio, jumped out in front and drove away from the field. Smith went on to pick up his third consecutive feature win and the fourth on the season. Carter Murday drove up through the field to finish second after starting 11th. Mike Jessen finished third and Josh Robertson maintains a slim point lead after ending up fourth. Trevor Miller finished fifth.

Gabe Mueller and Kolin Schilt put on an exciting show in the Bomber A Main. Mueller got out in front of the Bomber A Main after battling with Schilt the first couple of laps. Schilt would regroup and take the lead on a restart just past halfway, but Mueller wasn’t done. Mueller snatched the lead away from the Stryker, Ohio, driver after a late race restart. The two would then battle side by side on the final lap with Schilt narrowly edging out Mueller for the win. Mueller’s fifth consecutive second-place finish keeps him atop the Bomber point standings. Jeff Foks Jr. drove to a third-place finish after starting 12th with Chane Stuckey and Justin Gamber rounding out the rest of the top five finishers.

Joe Elliott got the lead early in the Compact feature event after battling with Eli Kolodie. Elliott maintained the top spot until an incident while battling with Jason Deshler for the lead took him out of contention. Deshler then took over as race leader until Eric Carr got by a couple laps later. Eric Carr would lead until the final lap. Joe Carr, out of Wauseon, Ohio, made a last lap pass for the win. It was his second win of the season. Eric Carr settled for second followed by Todd Drewes, Jason Deshler and Eli Kolodie.

Logan Hough was in command of the final race of the night, the Bomber B Main. Under a lap four caution, Hough’s car rolled to a stop on the track and his night ended early. Ronnie Bloomfield took over as the race leader and went on to pick up the win over Jeff Wells who just barely held off John Lonabarger at the finish for second. Dalton Iffland and Aaron Barrick were the rest of the top five finishers.

Oakshade Raceway hosts a big night of racing this Saturday, June 19th with the $5,000-to-win Barney Oldfield Race. The event is also an American Late Model Series race. UMP Sportsman, Bombers and Compacts will also be back in action. Gates open at 4pm with hot laps at 6pm and racing at 7pm. 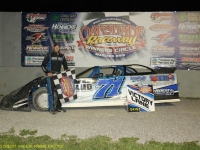 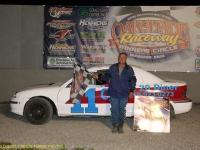 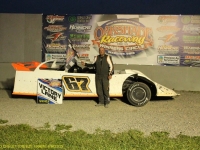 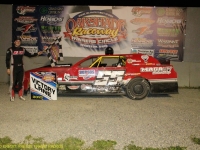 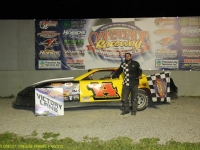