WAUSEON, OH – Rusty Schlenk became the first four-time winner of the prestigious Oakshade Raceway Barney Oldfield Race while picking up his fourth feature win of the season Saturday night over a stout field of competitors.

With weather moving in and lightning lighting up the distant sky, drivers were called to the staging area early for the 40-lap, 32nd Annual Barney Oldfield/American Late Model Series main event. Rich Bell and last week’s UMP Late Model feature winner, Chris Keller, started on the front row and had a heck of a battle for the lead right after the drop of the green. The two divers raced side by side the first three laps trading the lead back and forth. Bell finally established himself as the leader and began to open a gap. Oakshade point leader Devin Shiels moved in and took the lead away from Bell on lap seven. Shield then took off and pulled away from the field.

McClure, Ohio’s Rusty Schlenk started eighth and drove his Domination Race Cars #91 up to second by lap 13. Schlenk closed in on Shiels while working through lapped traffic. He looked to the outside to take the lead on lap 33. Schlenk pocketed $5,000 for the win with Shiels settling for second. Keller was able to get back around Bell to finish third. Bell slipped back to fourth and Colin Shipley climbed seven positions to finish fifth.

With lightning continuing to light up the sky, the UMP Sportsman feature took the green flag with pole-sitter Scott Robertson leading the first lap. Oakshade Sportsman point leader Josh Robertson fought back after starting on the outside of the front row and took the lead on lap two. Rusty Smith from Sylvania, Ohio, closed in a couple laps later to challenge Robertson. Smith was able to get by Robertson while working through some slower traffic and went on to post his fourth consecutive feature win. Josh Robertson and Carter Murday had a rather good battle for second late in the race with Robertson able to fend Murday off to finish second. Mike Jessen finished fourth behind Murday and Scott Robertson rounded out the top five finishers.

Jeff Foks Jr. and Kolin Schilt battled for the lead early in a caution-free Bomber A Main. Schilt, out of Stryker, Ohio, was able to get out front and pull away for an easy win. It was his third consecutive A Main victory and fourth of the season. Jeff Foks Jr., Adam Lantz and Gabe Mueller had a good battle for second through fourth for much of the race. Foks was able to hold off Lantz and Mueller to finish second. Josh Corkwell finished fifth.

The Compact A Main was delayed a couple of laps after a few rain drops started to fall. They quickly subsided and Cory Gumm darted to the lead as soon as the green flag flew. Gumm’s car was slow to come up to speed on a restart after an early caution and Jason Deshler got by for the top spot. Wauseon, Ohio’s Eric Carr passed Deshler on the outside to take the race lead a couple laps later. Carr pulled away and the Compact point leader went on to pick up his third feature win of the season. Gumm was able to get back by Deshler to finish second. Last week’s feature winner, Joe Carr finished fourth and Todd Drewes ended up fifth.

David Ellis jumped out to a big lead early in the Bomber B Main. Ellis and Jarrett Rendel got together to bring out the caution flag while running in the top two spots. Donnie Ringman from Clayton, Michigan, assumed the lead and led the field back to the green flag. Jeff Wells spun coming off turn four a couple laps later and was hit hard by Brandon Goad destroying both cars and brought out the red flag. Both drivers climbed out under their own power. Ringman went on to pick of the checkered flag. Rendel recovered nicely to finish second, just edging out John Lonabarger. Aaron Barrick finished fourth with Dylan Wittes fifth.

Aaron Vanpelt out of Clayton, Michigan, started fourth in the Compact B Main and got to the front quickly to lead from flag to flag. It was his first feature win of the season. Jake Randall drove to a second-place finish followed by Megan Elliott, Todd Drewes Jr. and John Hart.

The first of three Oakshade/Attica Late Model Challenge Series events this season is Saturday, June 26th along with UMP Sportsman, Bombers and Compacts. Gates open at 4pm, hot laps at 6pm and racing at 7pm. 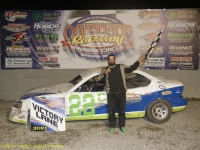 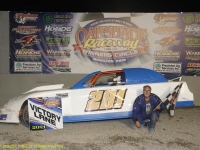 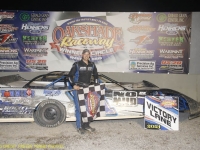 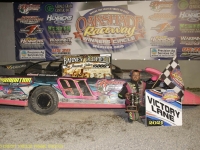 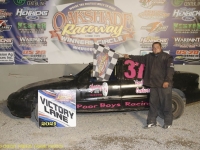 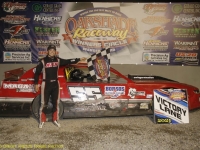