With an extra $204 going to the fourth-place finisher in honor of Tim Fisher, the 25-lap UMP Late Model feature started off with pole-sitter Cody Bauer jumping out to the lead. Just after completing the first lap, Bauer ended up spinning in turn two bringing out the only caution flag of the race. Three-time track champion Devin Shiels would assume the lead for the restart. Behind him, Casey Noonan and Rusty Schlenk had a good battle going for second as the two drivers traded the position back and forth. Eventually Schlenk would take over second and set his sights on Shiels. Schlenk, last week’s feature winner, was able to chip away at Shiels lead while working through lapped traffic, but Shiels was too strong and went on to pick up the checkered flag. Schlenk settled for second with Noonan third. Terry Rushlow finished fourth and Hillard Miller climbed nine positions to finish in fifth.

Competitors in the Tim Fisher/Billy Ruff Memorial UMP Sportsman feature were racing for $444 to win and an additional $104 for second place. Point leader Josh Robertson would lead most of the race, but Carter Murday out of Adrian, Michigan was hungry for his first UMP Sportsman feature win after a string of strong showings this season. After pressuring Robertson for the lead much of the second half of the race, Murday was finally able to duck under the race leader with two laps remaining and held off Mike Jessen for the win. Rusty Smith finished third after five consecutive feature wins. Matt Lindsey ended up fourth with Robertson slipping back to fifth.

Chane Stuckey got out to the early lead in the Tim Fisher/Billy Ruff Memorial Bomber A Main that offered an additional $104 for the winner and an extra $50 for second.  Last week’s feature winner, Kolin Schilt was running third and spun in turn two and had to restart at the tail. Shortly after the restart, Gabe Mueller tried to get under Stuckey for the lead and Adam Lantz dove to the inside of both drivers to muscle his way into the lead. Lantz, out of Wauseon, Ohio, got his second feature win of the season with Mueller and Stuckey second and third respectively. Justin Gamber finished fourth and pole-sitter Roscoe Stetten finished fifth.

Hillsdale, Michigan’s Cory Gumm earned his second consecutive Compact A Main feature win and his fourth of the season. Gumm started on the outside of the front row and led from flag to flag. Point leader Eric Carr finished second. Jason Deshler got by Joe Carr to finish third and Jeff Goodman rounded out the top five finishers.

The Tim Fisher/Billy Ruff Memorial Bomber B Main started off with a big pile up after Shane Estes spun in front of most of the field going into turn one on the first lap. Estes, out of Waterville, Ohio, did a 360 and kept going while chaos ensued behind him. The result was a complete restart in which Estes made the most of by darted out to the lead. David Ellis got into Bill Reeves Jr. while battling for second and spun on lap nine. Time expired under another late caution setting up a one-lap race to the finish. Estes went on to take the victory while John Lonabarger charged his way up to second after having to restart at the tail of the field earlier in the event. Dave McMannamy finished third followed by David Ellis and Chris Yockum.

The Compact B Main was the final event of the night and once again produced one of the most exciting finishes. Edgerton, Ohio’s Kristen Vandyke got out in front early. Mark Barrick closed in and made a run to get alongside Vandyke coming to the checkered flag, but it wasn’t enough. Vandyke took the victory with Barrick settling for a close second. Emaleigh Fickle finished third followed by Gage Rushlow and Shelby Hulbert.

The VARC had 22 classic racing machines on display and put on a great show earlier in the night with a couple heat races and two features. Randy Tusing and Mike McWilliams were VARC feature winners.

Devin Shiels’ feature win gives him a confidence boost heading into this coming Saturday’s $10,000 to win Birthday Race/DIRTcar Summer Nationals event. Gates will open at 10am on Friday for anyone wishing to reserve their seats and for campers. Everyone that arrives on Friday will be required to purchase tickets for Saturday’s event. Gates will open at 10am on Saturday morning with the pits open for everyone until 4pm to meet drivers and get autographs. Pit passes will be required after 4pm to remain in the pits. In addition to UMP DIRTcar Late Models, the Summit Racing Equipment Modified Nationals will also be in action in addition to the Bombers. Hot laps and qualifying begin at 6pm with racing following. 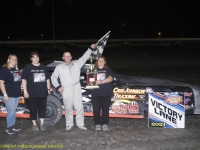 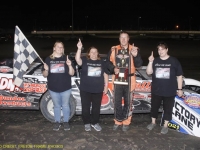 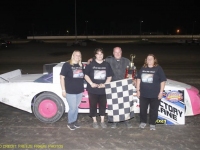 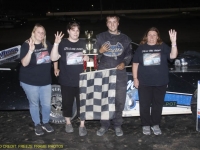 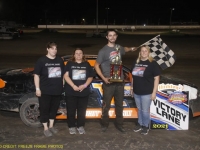 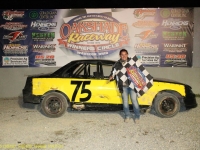