It was defending track champion Steve Kester taking command for the first part of the 25-lap Ehrsam Excavating UMP Late Model feature event, however, Kester’s night would end early after losing the left rear wheel going into turn one while leading. The field scattered to avoid Kester’s spinning car, but Kester was done for the night. Dusty Moore then assumed the lead with Chris Keller in second. McClure, Ohio’s Rusty Schlenk closed in and took second from Keller on lap 12, but Keller fought back and reclaimed the position on lap 14. The two drivers were battling hard for the second position when Schlenk tried to get under Keller going into turn three and the two cars came together. Keller spun and Schlenk stayed in the gas to keep from stopping on the track. Colin Shipley had nowhere to go and slammed into Keller bringing out the yellow flag. A couple laps later, Hillard Miller and Ron Miller got together while battling in the top five which stacked the field up and brought out another caution period.

Dusty Moore continued to lead Rusty Schlenk until lap 21 when Schlenk finally was able to get by and go on to take the $1,500 checkered flag in the Ehrsam Excavating sponsored race. Schlenk apologized to Keller during his post-race interview saying he thought he was far enough up alongside that Keller knew he was there. Moore settled for a second-place finish. Track point-leader Devin Shiels had to go to the tail of the field twice after getting caught up in a couple incidents and still managed an impressive third place finish. Terry Rushlow started 14th and gained ten positions to finish fourth. Casey Noonan also had to go to the tail after going to the pits to change a flat tire and still managed a top five finish.

Jeff Robertson jumped out the lead on the first lap of the UMP Sportsman feature after pole-sitter Ian Palmer spun coming off turn four. Robertson was able to hold the lead the first half of the caution-filled feature event with Rusty Smith pressuring. Finally, Smith was able to make the pass for the lead and never looked back despite multiple cautions that kept the field tight. It was the Sylvania, Ohio, driver’s fifth win in a row. Mike Jessen was heavily pressuring Carter Murday for second the final few laps, but Murday persevered and kept Jessen behind him at the finish. Jeff Robertson fell back to finish fourth with point leader Josh Robertson ending up fifth.

A couple early cautions slowed the start of the Bomber A Main. One included point leader Gabe Mueller forcing him to the tail. Once things got going, Chane Stuckey shot out to a huge lead. A caution flag mid-way through the race wiped out Stuckey’s advantage. Kolin Schilt got to the inside of Stuckey and the two drivers battle side by side for a couple laps until Schilt was finally able to clear him. Schilt, out of Stryker, Ohio, then went on to pick up his fourth consecutive Bomber A Main win. Stuckey took second with Jeff Foks third. Donnie Ringman finished fourth and Gabe Mueller recovered to finish fifth.

Cory Gumm out of Hillsdale, Michigan, put his 1G back in the Oakshade winner’s circle for the third time this season picking up the win in the Compact A Main over point leader Eric Carr and Joe Carr. Jason Deshler started on the pole and slid back to finish fourth with Joe Elliott climbing six positions from the start to end up fifth.

The Bomber B Main featured a father/son battle for the lead. Roscoe Stetten led the entire distance, but had to deal with his son, Cody Stetten, who was trying to find a way around him just about the entire race. A late caution set up a one-lap shootout to the finish. Roscoe Stetten, from Adrian, Michigan, was able to hang on for the victory with Cody settling for second. Jeff Wells, Craig Turner and Aaron Barrick were the rest of the top five finishers.

The most exciting finish of the night took place in the final event, the Compact B Main. Earlier in the race it was Megan Elliott and Brian Isley trading the lead back and forth with Isley finally getting the position on lap six. UNOH student Blake Andrus, out of Sweetwater, Texas, made a move to the outside of Isley exiting turn four with the checkered flag in sight. Andrus was able to carry his momentum to just edge out Isley for the win at the line. Elliott finished third with Christian Hulbert and Todd Drewes Jr. rounding out the top five.

It will be the Tim Fisher/Billy Ruff Memorial this coming Saturday, July 10 at Oakshade Raceway with the Sportsman feature paying $444 to win. UMP Late Models, Bombers, Compact and the Vintage American Race Cars (V.A.R.C) will also be in action. Gates open at 4pm with hot laps at 6pm and racing at 7pm. 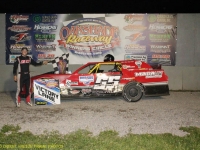 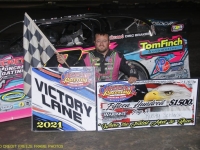 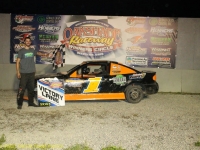 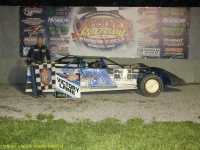 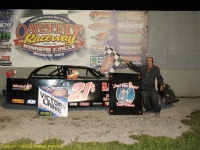 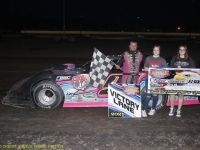 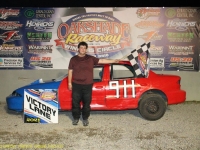