WAUSEON, OH – Holland, Ohio’s Gabe Mueller has had quite a year.

He wrapped up his first Oakshade Raceway Bomber track championship last Saturday and followed that up with his first $1,000 to win Hot Rod Welding & Engineering Papa Boiler Bomber Spectacular victory this past Saturday night.

Mueller battled with the defending Hot Rod Welding & Engineering Papa Boiler Bomber Spectacular winner, Adam Lantz, at the drop of the green flag with Mueller getting the advantage. Lantz would backslide to fourth with Kolin Schilt and Jeff Foks Jr. getting by for second and third, but Lantz would battle back up to second. A late caution would give Lantz one last shot at the lead, but Mueller was too strong and led the entire distance for the win. Lantz settled for second with Schilt, Foks and William “Bubba” Cundick the rest of the top five finishers.

In UMP Late Model action, Dusty Moore started from the pole and jumped out to a sizeable lead early. Last week’s feature winner, Rusty Schlenk, started inside the third row and climbed to the second after passing Garrett McClain and unofficial 2021 track champion Devin Shiels. Schlenk tracked down Moore and made the pass for the lead on lap 17 of the 25-lap feature. Shiels also got by Moore and then began to reel in Schlenk for the lead. Shiels ran out of laps, catching the Schlenk right at the checkered flag. It was the McClure, Ohio, driver’s ninth Oakshade Raceway feature win of the year. Colin Shipley finished third behind Shiels with Moore slipping back to wind up fourth. McClain ended up fifth.

Jesse Jones and Drew Smith had a great battle for the lead early in the UMP Sportsman feature event. Smith led the first lap after starting on the outside of the front row, but Jones fought back to lead lap two. Smith regained the lead on lap four, but a caution flag would revert the lineup to the previous lap, giving the lead back to Jones. After the restart, Jones, out of Liberty Center, Ohio, pulled away and went on to pick up his first Sportsman feature win. Josh Robertson got by Smith to finish second. Mike Jessen finished fourth with the youngster, Carter Schlenk, finishing fifth in just his second ever stock car feature race.

A wild Compact A Main wrapped up Saturday’s racing action at Oakshade with several cautions at the start forcing officials to start the field single file. Once things got going, Jason Deshler would lead the field. Deshler was slow coming up to speed on a restart after a debris caution and dropped back through the running order. Joe Carr would take over the lead, but his nephew and unofficial 2021 track champion, Eric Carr, played spoiler and passed Joe to earn his fifth Compact feature win of the season. Joe Carr settled for second followed by Joe Elliott, Nathan Goodman and Brandon Proffitt. 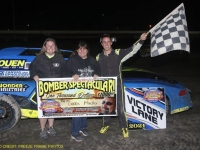 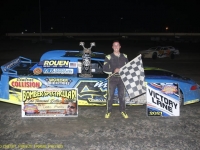 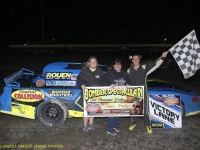 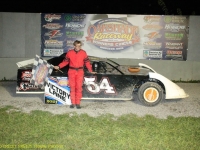 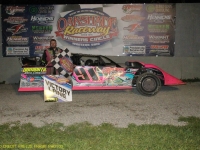 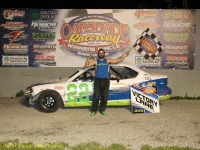