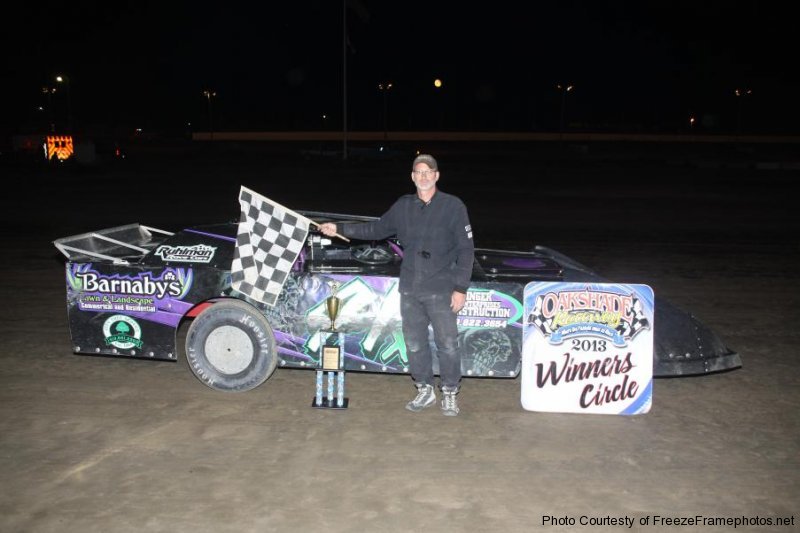 Months of hard work and dedication finally payed off for several drivers who wrapped up season championships at Oakshade Raceway on Saturday night. 2011 Sportsman Champion Tim Line finished his second championship run in style with his ninth feature win of the year.

Line started the Season Championship Night UMP Sportsman feature event on the outside of the second row. He tracked down race leader Rich Ruff by lap seven and made a nice move to take the lead to the inside when Ruff got held up behind a slower car. Later in the race, Steve Meeks got crossed up on the front stretch right in front of Roger Weirich who slammed into him, bringing out the final caution flag with nine laps remaining. Line went on to pick up the feature win. Ruff managed to hold off Rusty Smith for a second place finish. Bob Gregory finished fourth and defending champion Mike Jessen, who started the night with an outside shot at another Sportsman title, wound up fifth.

Roscoe Stetten started on the pole of the Season Championship Night Bomber A Main and led Chris Sands the first few laps of the race. A hard-charging Jeff Foks quickly closed in and began to challenge Stetten after getting by Sands. Foks made a move to the inside of Stetten coming off turn four on the fourth lap of the race. The two drivers touched as they raced down the front stretch and it appeared as though Foks may have damaged something in the right-front from the contact. Foks slowed and stopped in turn two which brought out the caution signaling the end of his night. Adam Noonan got by Richard Riffe, Sands and Stetten two laps after the restart to take the lead. A late caution for Terry Rump’s spin set up a two lap race to the checkers and gave Sands another chance at Noonan. Sands got to the inside of Noonan and raced him hard all the way to the finish, but Noonan was able to hang on for his second Bomber A Main win of the season. Sands settled for second ahead of Riffe. Despite finishing fourth, Terry Rushlow became the unofficial 2013 Bomber Track Champion by 35 points over Noonan. Greg Detray finished the race in fifth.

Cody Laney already had the Oakshade Hornet Championship unofficially wrapped up several weeks ago and led the first part of the feature event. Brandon Myers and last week’s feature winner, Amanda Shammo, both got by for the top two positions and battled for the lead all the way to the finish with Myers coming out on top. Shammo was second followed by Breanna Franks, Nathan Shammo and Laney who slipped back to finish fifth.

“Sparky Marky” Gillingham Jr. entered Season Championship Night just a single point behind Austin Casteneda in the Sport Compact class. Some bad luck in his heat event cost Gillingham a few more points to Casteneda by feature time. Gillingham did all he could do, getting to the front of the feature race early and hoping for a bad finish from Casteneda who peaked in the second position. After the white flag, Casteneda’s car lost power and began to slow on the backstretch. Gillingham went on to win followed by Matt Brazeau who passed Casteneda’s ailing car. Luckily for Casteneda, he was able to limp to a third place finish ahead of Cory Gumm and Terry Rushlow Sr. That third place finish was enough to keep him three points ahead of Gillingham and to be crowned the unofficial 2013 Sport Compact Champion.

A dominating performance by Derek Morris in the Bomber B Main earned him the feature win despite a late caution with two laps remaining. That wiped out a big lead Morris had over Amy Clair and Mathew Chapman, but neither could get by Morris in the final couple laps. Clair and Chapman finished second and third respectively followed by Colin Walker and Dave “Gumby” Golembiewski Jr.

Gabe Mueller led the first three laps of the Bomber C Main until Tony Tolles took over on lap four. Pole-sitter Jerry Fulton slowed after going a lap down and was trying to exit the track off turn one, but a couple cars running in the top five were caught up in the incident including Joe Overmyer. That brought out the yellow flag which then changed to red when fire erupted under the hood of Anthony Petrey’s car. The fire was quickly extinguished and once racing resumed, it was all Tony Tolles who went on to the easy win over Shaun Sharp, Mueller, Nathan Goodman and Joe Elliot.

The final weekend in September is the final weekend of racing at Oakshade Raceway this year. A big show on Saturday night will feature the 14th Annual Bomber Spectacular and the Butch Hobling Memorial, each paying $500 to win. Hornets and Sport Compacts will also be in action. Gates open at 4pm with racing at 7pm. Sunday afternoon will feature the final Enduro race of the season with a distance of 250 laps or two and a half hours, whichever comes first. Gates open at noon on Sunday with the race at 2pm. 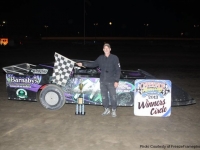 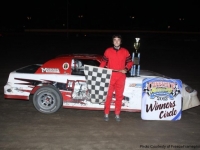 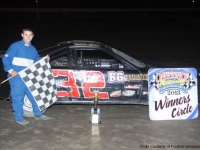 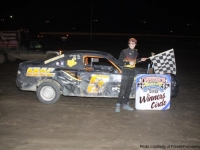 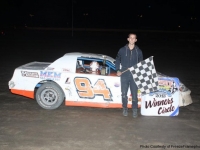 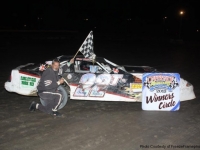