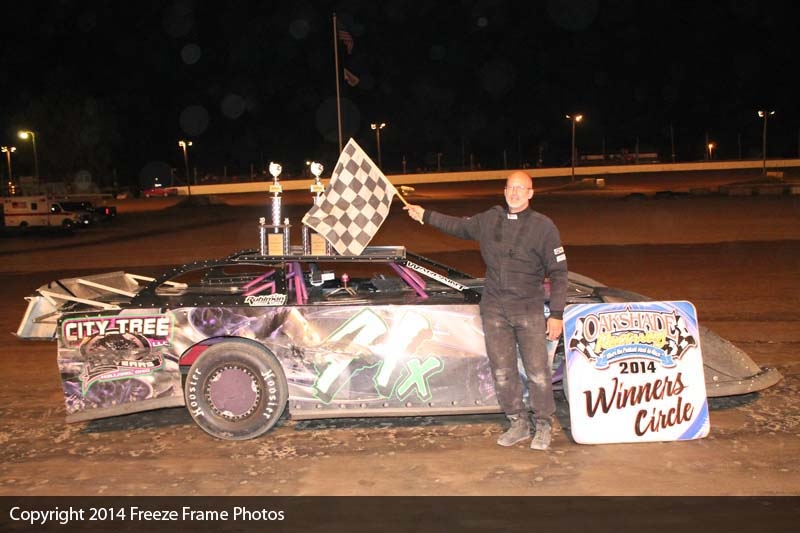 For the second year in a row, Tim Line swept the UMP Sportsman Twin 25’s at Oakshade Raceway on Saturday night. A set back at the start of the second Sportsman feature put Line way back in the field and made for some very exciting racing action late in the race.

UMP Sportsman drivers competed to make it into the UMP Sportsman Twin 25’s; two 25-lap feature events with the top six or eight drivers inverted for the second race depending on what the winner of the first race draws. Joe Derbeck darted out to the lead after starting on the pole of the first feature. George Lindsey muscled his way into the lead and almost put Derbeck in the wall. Tim Line started on the outside of the second row and passed both drivers for the lead on lap five. Line set sail after that and opened up a big lead, however, Lindsey managed to close up the distance a bit while working lapped traffic. It wouldn’t be enough for Lindsey as Line picked up the easy victory over Lindsey and Derbeck. Jamie Grochowski was fourth with Chane Stuckey fifth.

The second Sportsman Twin 25 feature race was nothing like the first. Line drew for an inversion of six, putting him on the outside of the third row. On the first lap Derbeck, who was directly in front of Line, had a problem and fell way off the pace. Line had to check up and fell all the way back to 17th. Chane Stuckey followed up his fifth place run in the first race with a strong move to take the lead from Mike Jessen on the second lap. Stuckey managed to open a little lead over Jessen as Line tried to work his way back through the field. A caution on lap 17 tightened the field a final time with Line restarting in fifth. Line quickly got around Grochowski and Bruce Stuart without much incident. With laps running out, Line tried to find room on the outside of Jessen for second. Line squeezed by on the outside and managed to make the pass after smacking the backstretch wall and damaging the rear end of his car. In a heart breaker for Stuckey who lead most of the race, Line caught him and made the pass for the lead on the final lap to sweep night’s events after an incredible run. Stuckey settled for second with Jessen hanging on to finish third. Stuart and Grochowski rounded out the rest of the top five.

A crazy finish was the highlight of the UMP Late Model feature event. Five-time Track Champion Rusty Schlenk was back in championship form grabbing the lead over Brandon Thirlby at the start. A big pile up that involved Mike Miller, Mark Pifer Sr., Josh Haynes, Curtis Deisenroth and Jeff Babcock brought out the yellow flag early. Thirlby took advantage and took the lead by a nose at the completion of lap two. Thirlby and Schlenk raced side by side for the lead with Schlenk finally edging out Thirlby on lap eight to reclaim the top spot. After that, Schlenk began to open up his advantage. Steve Kester was on the move and worked his way up to second by lap 13 and set his sites on Schlenk. Schlenk seemed to have things well in hand in the final laps until Ken Hahn spun right in front of Schlenk coming off turn four on the final lap. Schlenk was hard on the brakes to keep from getting into him and made a great move to get around him just as Kester was closing in. Schlenk managed to nurse his car across the line just ahead of Kester to earn his fourth feature win of the year and close to within 17 points of Ruhlman who is on top of the point standings. Thirlby held on to finish third behind Kester with Ruhlman fourth. Casey Noonan finished fifth.

Jeff Foks tightened up the point standings in the Bomber class, just three points behind Chris Sands after Foks collected his seventh A Main win of the year. Foks took command at the start of the A Main with Gregg DeTray running second. A great battle ensued well behind Foks with DeTray trying to fend off Curt Dickie, Terry Rushlow and Chris Sands. That battle came to an abrupt halt for Detray when his transmission locked up with just two laps to go which brought out the caution flag. Foks took the checkered flag and Chris Sands picked up a couple positions at the end to finish second. Rushlow was third followed by Dickie and Derek Morris.

Aaron Barrick picked up his first feature win at Oakshade Raceway in the Best Performance Motorsports Compact feature event after starting out the outside of the front row. Brandon Myers worked his way up to a second place finish after starting near the back of the field. Last week’s feature winner, John Martis ended up finishing third with Brogan Rehklau and Cody Stetten rounding out the rest of the top five.

Scott Hammer took the lead at the start of the Bomber B main after starting on the outside of the front row. Jim Remley muscled his way into the lead on lap five with Richard Riffe following into second. Riffe then took the lead on lap six on the inside and went on to take the checkered flag. Skeet Reckner managed to edge out Remley for second at the finish. Terry Perry finished fourth and Hammer slipped back to finish fifth.

For the first time this year, a Bomber C Main was run to wrap up the night’s racing action. Scott Robertson started on the outside of the third row and drove to a feature win. Chuck Stuckey started at the very tail of the field and took home a second place finish followed by Bill Daniels, Tim McNicol and Rob Price.

Oakshade Raceway will host the American Late Model Series on Saturday, August 2nd with a $2,000 to win feature event. UMP Sportsmen, Bombers and Best Performance Motorsports Compacts will complete the show. Gates open at 4pm with racing at 7pm. 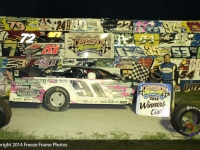 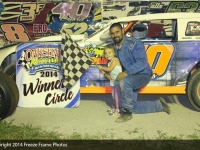 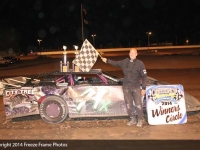 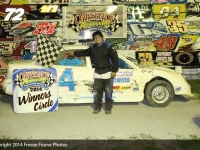 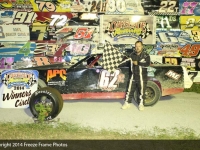 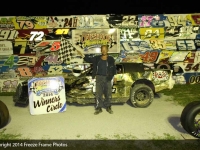