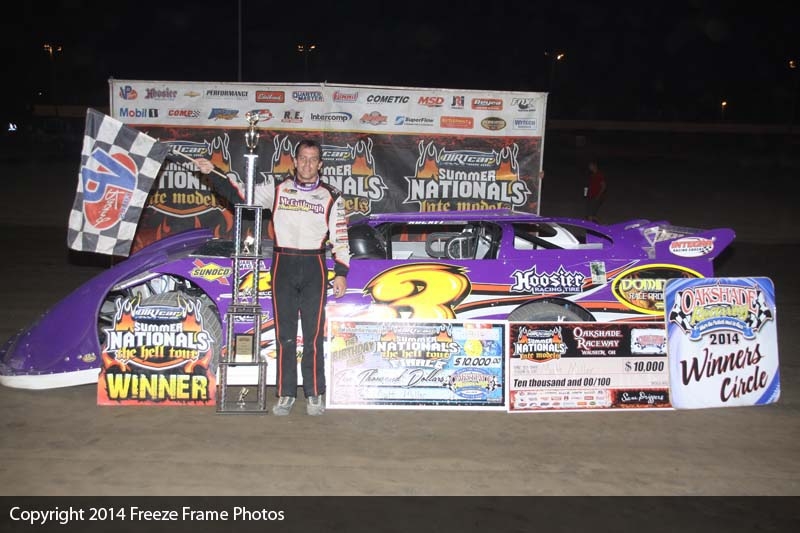 Moweaqua Illinois’ Shannon Babb entered the final event with a 43 point advantage over Ryan Unzicker and 45 points on Brian Shirley. Also on the line was the $10,000 going to the winner of the 60-lap 16th Annual Birthday Race Late Model feature event. Mason Zeigler seemed like a safe bet to win after a strong showing the past two nights picking up consecutive wins at Brushcreek and Attica. Zeigler started the night off setting the fast time with a lap of 14.654. The Uniontown, Pennsylvania driver ended up on the pole of the feature and led the first part of the race. Last week’s Oakshade feature winner and last year’s Birthday Race winner, Matt Miller got by Jeep Van Wormer by lap 10 to take over second and began to reel in Zeigler. Miller caught Zeigler in lapped traffic and used it to his advantage to take over the race lead on lap 15. A couple laps later, Zeigler spun in turn one while racing with Ryan Unzicker for the second position which brought out the only caution period in the race. Miller was able to pull away from Unzicker after the restart. Later in the race, Babb made his presence known, pressuring Unzicker for second. Miller’s lead began to shrink just a bit toward the end, but it was enough to win his third Oakshade Raceway Birthday Race. He joins Babb as the only two drivers to have won this event three times. Unzicker finished .759 seconds behind Miller and Babb’s third place finish was more than enough to lock up his fourth DIRTcar UMP Summer Nationals title. Last year’s Summer Nationals champion, Brandon Sheppard finished fourth with Van Wormer slipping back to fifth.

Next up was the Summit Racing Equipment Modified Nationals 25-lap feature event. Brian Ruhlman made a daring move at the start, going three-wide with Taylor Cook and Randy Lines to take the race lead early. Ruhlman then proceeded to check out on the rest of the field. Matt Hamilton from Aurora, Indiana began to close in on Ruhlman late in the race, but ran out of laps. Hamilton ended up finishing second, .936 seconds behind Ruhlman in the caution-free race. Jeff Babcock finished third with Collin Thirlby fourth. Josh Scott started 16th and worked his way up to a fifth place finish.

The Best Performance Motorsports Compacts wrapped up a great night of racing with their feature event that started off with some three-wide racing for the lead. John Martis, Aaron Barrick and Brandon Myers battled at the front with Martis eventually settling in to the top spot by lap two. A couple laps later Barrick fell off the pace and tried to limp back to the pits, but didn’t quite make it and brought out the yellow flag. Martis continued to lead Myers all the way to the checkered flag. It was the fourth feature win of the year for Martis who was also celebrating a birthday. Last week’s feature winner, Myers, finished second. Brogan Rehklau was third followed by Cody Stetten and Matt Brazeau.

The Sportsman and Bomber classes will be back in action this Saturday, July 26 at Oakshade Raceway for the Sportsman Twin 25’s. The Sportsmen will run two full 25-lap features in addition to a full racing program of UMP Late Models, Bombers and Best Performance Motorsports Compacts. Gates open at 4pm with racing at 7pm. 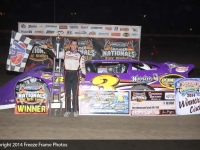 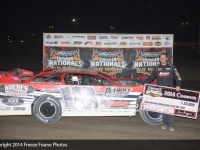 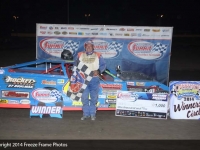 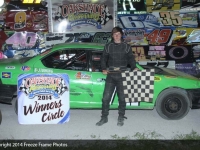