Ruhlman out of Clarklake Michigan, started on the outside of the front row and immediately gained the lead over Steve Miller and the rest of the field. After a couple cautions on lap four and five, the final 20 laps ran caution-free with Ruhlman maintaining a several car-length advantage over second place Brad Eitniear for the majority of the race. Eitniear ended up finishing second followed by Casey Noonan and Rusty Schlenk who battled each other much of the night. Devin Shiels came from 14th starting position to finish fifth and currently holds a decent 129 point advantage over Ruhlman in the point standings.

The top two drivers in the Oakshade UMP Sportsman points, Drew and Rusty Smith, did not finish the feature event. Both drivers pulled off the track and retired to the pits before making it to the checkered flag. About a handful of laps into the UMP Sportsman feature, Swanton, Ohio’s B.J. Gregory passed defending track champion Mike Jessen for the lead and drove off to an easy win. It was his first of the season for Gregory. Jessen and Mathew Chapman were battling for second when Chapman tangled with a lapped car forcing him to restart at the rear of the field. Jessen held on to finish second in the race with Jeff Geis third. Joel Morton won the B Main just to make the starting line up of the feature and worked his way up to a fourth place finish after starting 16th. Josh Robertson also moved up nicely to finish fifth after starting 13th. Despite not finishing, Drew and Rusty Smith remain atop the point standings.

It took four attempts to get the Bomber A Main started due to multiple first lap incidents. Once things finally did get going, it was the Jeff Foks Jr. show. Foks, from Holland, Ohio, led the entire distance to win his second A Main of the year which also catapulted him into the Bomber points lead after former point leader Tim Hancock was caught up in an incident and ended up finishing ninth. Craig Dippman fended off Chris Henry for a second place finish followed by Terry Rushlow and last week’s A Main winner Rich Riffe.

Brogan Rehklau appeared to be on his way to his eighth Compact feature win of the season, but a mistake on the last restart would cost him the victory. Rehklau jumped a restart with only a few laps remaining which resulted in a two position penalty. Rehklau was able to get to the front and led the field to the checkered flag, but due to the assessed penalty, he was credited with a third place finish. Jeff Foks Sr. from Holland, Ohio was awarded the win, his third of the year, and that keeps him atop the point standings with a 30-point cushion over Rehklau. Cameron Tusing settled for a second place finish after starting on the pole. Ken Watts ended up fourth with Nathan Goodman fifth.

Clayton, Michigan’s Donovan Paskan earned his first Bomber feature win of the season after keeping a hard charging Dylan Hough behind him in the Bomber B Main. Hough started 18th and had a great run to finish in second. Gabe Mueller also started deep in the field, in the 16th position, and wound up third. Mike Villena and Zach Stotz were the rest of the top five finishers.

Ryder Price from Morenci, Michigan, quickly made his way to the front of a caution-free Bomber C Main. Price went on to pick up his very first feature win over Scott Robertson, Cory McCaughey, Steve Reeves and Scott Hammer.

This week, Oakshade Raceway will hold its First Annual Dirt Roads Flea Market at the race track this Wednesday through Friday from 10am-7pm each day. For more information on the flea market, call 419-466-6055. Then on Saturday, August 26th, Oakshade Raceway will host another full racing program of UMP Late Models, UMP Sportsman, Bombers and Compacts. Gates open at 4pm, hot laps are at 6pm and racing begins at 7pm on Saturday. 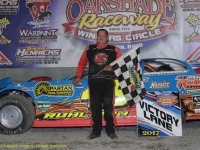 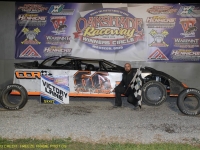 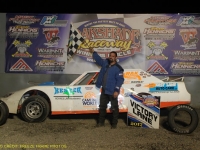 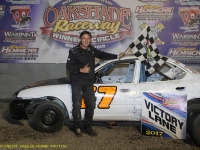 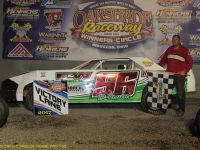 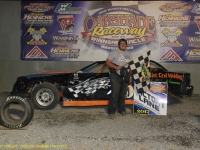