WAUSEON, OH – Oakshade Raceway’s Night of Wheels put smiles on the faces of the many kids who got to take home a new bike on Saturday night. A total of 78 new bikes weregiven away plus some monetary prizes as well. The racing action was also exciting with Britton, Michigan’s Devin Shiels winning his third Oakshade Raceway UMP Late Model feature of the season after taking the lead late in the feature race.

Dusty Moore started on the pole of the UMP Late Model feature event and took the early lead. Rusty Schlenk started eighth and had moved into second place by lap five of the 25-lap race. Schlenk caught Moore and started challenging for the lead by lap 11. The two drivers would continue to battle while working through lapped traffic. Three-time track champion Devin Shiels finally closed in on the leaders with only a handful of laps remaining. Shiels made quick work of both Schlenk and Moore going three-wide to take the lead with two laps remaining and went on to pick up the victory in the caution-free event. With the win, Shiels continues to lead the Oakshade point standings. Schlenk finally got by Moore and finished second which also moved him into second in the points ahead of Casey Noonan. Moore ended up finishing the race third with Chris Keller and Brad Wade rounding out the rest of the top five finishers.

Mike Jessen from Berkey, Ohio, got out to the early lead in the UMP Sportsman feature event. Multiple caution flags kept slowing things down and set up a one-lap shootout to the finish. Smith looked high and low to try to get around Jessen, but the four-time track champion held on to win his second feature of the year which also moved him up to first in the Sportsman point standings. Smith, who has won seven features this year, settled for a second-place finish followed by Jesse Jones, Josh Robertson and Jake Gamber.

Jeff Foks Jr. got by Jarrett Rendel for the lead on the second lap of the Bomber A Main. Point-leader Gabe Mueller moved up to second and then challenged Foks for the lead after an early caution. The two drivers battled side by side for several laps.  Kolin Schilt closed in and spoiled their fun, splitting between both Foks and Mueller to take the lead. Schilt went on to post his seventh A Main win of the season. Foks held off Mueller for second. Chane Stuckey finished fourth with Justin Gamber fifth.

The Bomber B Main featured one of the night’s most exciting finishes. Adam Lantz worked his way up through the field to take the lead on lap six after starting near the back. The race was plagued with multiple caution periods and the 12-minute time limit expired leading to another one-lap shootout to the finish with Lantz leading the field back to the green flag. Third-place in line was Wauseon, Ohio’s Dylan Hough who darted to the inside of Dalton Iffland to take second. Hough then drove deep into turn three and made an incredible move around the outside of turn four to get alongside Lantz and beat him back to the checkered flag. Lantz finished second and had something break in his steering and slammed hard into the tire barrier in front of a light pole along the backstretch. Lantz was able to walk away from the hard impact. Iffland, Josh McNicol and Ryan Clair were the rest of the top five finishers.

Megan Elliott from Waldron, Michigan, led from flag to flag in the final event of the night, the Compact B Main. Shelby Hulbert finished second followed by James Davis, Lawrence Mullins and Dalton McVey. 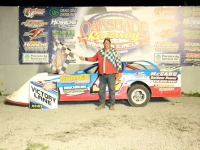 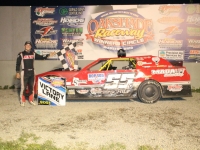 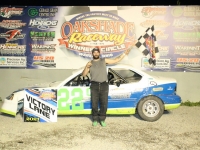 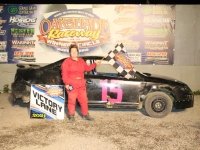 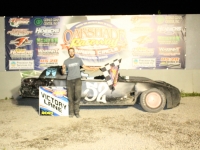 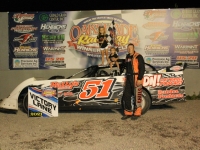