WAUSEON, OH – Chris Keller’s third visit to Oakshade Raceway proved to be the charm Saturday night. It was only the third time out in competition this season for the Adrian, Michigan driver who ended up parking his ride in winner’s circle after the final Attica Raceway/Oakshade Raceway Late Model Challege Series feature race sponsored by Napa of Archbold, Bryan and Wauseon, Dirt Nerds Podcast and Soldier Boy Productions.

The start of the 25-lap main event for the UMP DIRTcar Late Models was marred by a couple of accidents which resulted in a red flag for the track being blocked. After that, it was green flag racing all the way to the checkered flag. Pole-sitter Dusty Moore led the majority of the race until he had some issues trying to lap some of the back markers. That allowed Chris Keller to close in and challenge. Keller was able to take the lead on lap 17 and then proceeded to open up his advantage. The Attica/Oakshade Late Model Challenge Series point leader, Devin Shiels, closed in on Keller in the final couple of laps, but Keller held on to take the checkered flag with Shiels finishing second which solidified the Attica/Oakshade Late Model Challenge Series championship for the Britton, Michigan, driver. Moore held on to finish the race third with Colin Shipley celebrating his 15th birthday weekend with another top five finish in fourth. Oakshade Raceway late model point leader, Jake Rendel finished fifth.

The UMP DIRTcar Sportsman feature started off a little rough with a couple incidents on the first lap resulting in a complete restart. Swanton, Ohio’s Brandon Gregory took command after starting on the outside of the front row. Several more caution periods kept the field tight including a late caution with three laps to go after John Gamber spun. Gregory went on to pick up his fourth consecutive feature win which tightened up the point standings a bit more with Gregory trailing Rusty Smith by 38 points. Bruce Stuart was able to get by Smith to finish second in the feature. Smith, after winning the first four consecutive features of the season, settled for a third place finish. Carter Murday and Josh Robertson were the rest of the top five finishers.

Adam Noonan led early in a caution-filled Hot Rod Welding & Engineering Bomber A Main over Gregg DeTray. Kolin Schilt and Jeff Foks Jr. split around Detray to take over second and third positions by lap 10. Gabe Mueller fell off the pace and tried to get to the infield but a bunch of cars got caught up in a mess on the front stretch that brought out another red flag so the track crews could clean things up. Noonan, out of Sylvania, Ohio, went on to pick up his first feature win of the season over Kolin Schilt. Rich Riffe and Jeff Foks Jr. battled side by side for third with Riffe edging out Foks for the position at the finish line. Adam Lantz started 12th and finished fifth.

Cory Gumm’s winning streak came to end at five after he and Joe Carr tangled at the start of the Compact feature event ending Gumm’s shot at a sixth consecutive win. That opened the door for just the fourth different winner this year in the Compact class and Clayton, Michigan’s Aaron VanPelt answered that call. Eric Carr and Jeremy Wilber had a heated battle for second with Wilber getting it at the line. Mark Barrick finished fourth with Austin Stone fifth.

The final race of the night, the Hot Rod Welding & Engineering Bomber B Main, produced the most dramatic finish of the night. This was another race that had issues trying to complete green flag laps as caution after caution kept things from opening up. Derrick Roseman led a good portion of the green flag laps that were run, but Chris Bleikamp was putting the pressure on for the race lead late. Roseman would try to get the lead back in the final corner and made contact with the 21 of Bleikamp sending the leader spinning off turn four with the checkered flag in sight. Adrian, Michigan’s Roscoe Stetten made a move to the inside to avoid the melee coming off the final corner and took the checkered flag in his first start of the year. Roseman crossed the line in second followed by Dylan Burt, Shane Estes and Dave McMannamy. 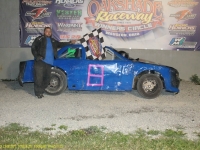 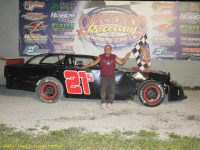 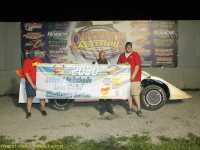 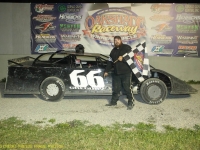 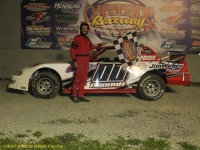 The start times for hot laps and racing for Saturday, July 25 has been pushed back one hour. Hot laps will be at 7pm and racing at 8pm. Draw ends at 6:45pm. Gates will still open at the regular time at 4pm.

Per the Governor’s order, everyone entering the gates are required to have a face covering on. Please understand that it is important to follow these guidelines in order to continue our season.